Darden’s Orlando Campus — Where the Wild Things Are

Alligators. Sandhill cranes. Bald eagles. Sounds like a list of Florida Everglades wildlife, right? Well, in a way it is. Darden’s Restaurant Support Center campus sits at the headwaters of the Everglades alongside Shingle Creek in Orlando — a naturalist’s dream.

Darden’s 50-acre campus includes four ponds and a half-mile walking trail for team members who want to stretch their legs in fresh air. A noisy contingent of sandhill cranes stretches their long legs as well, often while making bugling calls capable of peeling paint. The birds, which are designated as “threatened” in Florida, like to gather at the employee entrances to feed in the grass and gaze at their reflections in the three-story building’s floor-to-ceiling windows.

“Sometimes the building services team gets phone calls about the noise when the sandhills peck at the building’s glass,” said Carl Cline of Campus Building Services. The sandhills, which mate for life, have chicks every spring, and it’s a delight to see the fuzzy babies. Nature being what it is, though, the juveniles don’t always survive to adulthood, which is part of the reason they are threatened.

Bald eagle sightings are coveted. Matt Kilianek, a buyer for commodities purchasing, was working out on the treadmill in our windowed Fitness Center in April when he saw a bald eagle straight ahead along the water’s edge.

“It was an amazing sight.  I grabbed my cell phone, slowly walked up and snapped some photos. The eagle was aware of my presence but was more focused on its fresh catch, a large fish. I felt very lucky. Later, as I drove away, I spotted a pair of eagles on the bank, opposite the courtyard.”

Carl and the campus building services team serve as bussers for eagles, osprey, the occasional red-shouldered hawk and other birds of prey.  When the building team goes up to the main roof for maintenance, Carl said, they are faced with an array of bones – the leftovers of meals enjoyed by our onsite raptors.

Darden’s glassed-in meeting rooms on the edges of the building have great views and can be distracting. The sights of osprey diving feet-first into the water to catch fish and alligators stretched out on the banks have been known to divert attention from PowerPoint presentations.

“Our wildlife reminds us that ours is a shared planet and a shared space,” said Darden Sustainability Manager Kristine Young. “We want everything we do to have a positive effect, and that’s why sustainability is so important to Darden.”

It’s important to Paralegal Carole Conroy and Tax Manager Marty Wilson, too. They have front-row seats to a nest of four crow chicks that hatched April 19 in a palm tree outside a window near their desks.

“In  all of the chaos of the daily grind,” Carole said, “it’s been nice to have a reminder right outside of the beauty of nature and what really matters — family, life and strong twigs.”

Marty said some Darden team members’ children got a close-up look at nature. “The baby birds were especially popular on Take Our Daughters and Sons to Work Day and probably not something any of the children expected to see here.”

It wouldn’t be Florida without alligators, and the campus building services team has noticed a pattern. “The baby gators live in the small pond by our campus entrance,” Carl said. “When they grow larger, they move to the pond near our courtyard, and when they get bigger still, they move to a third pond farther away from our employees. Wherever they are, we leave them alone. At last glance, we had a five-foot gator in the pond outside our training wing.”

Snakes, alas, are also part of the package. Harmless black racers have been spotted ribboning across the grass, but Carl warned that our ponds have housed poisonous snakes. “We warn Darden team members not to hang out at the water’s edge near the courtyard. Trappers removed three water moccasins from there not long ago.”

At the edge of woods not far from our parking garage, wild turkeys sometimes strut early in the morning and graceful white-tailed deer forage after dark. “You’d be surprised what you can see here when the sun goes down,” Carl said. “This place really comes to life after dark.” 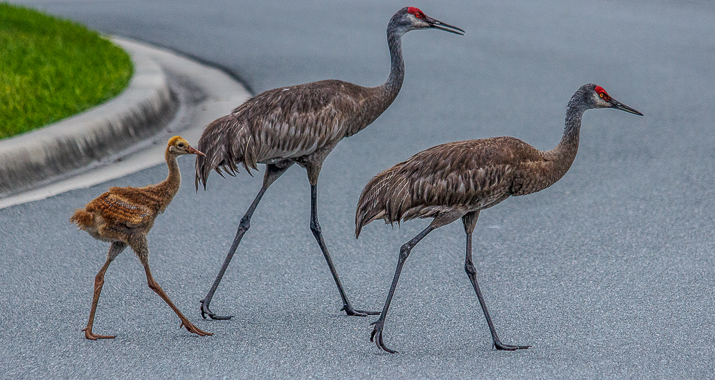 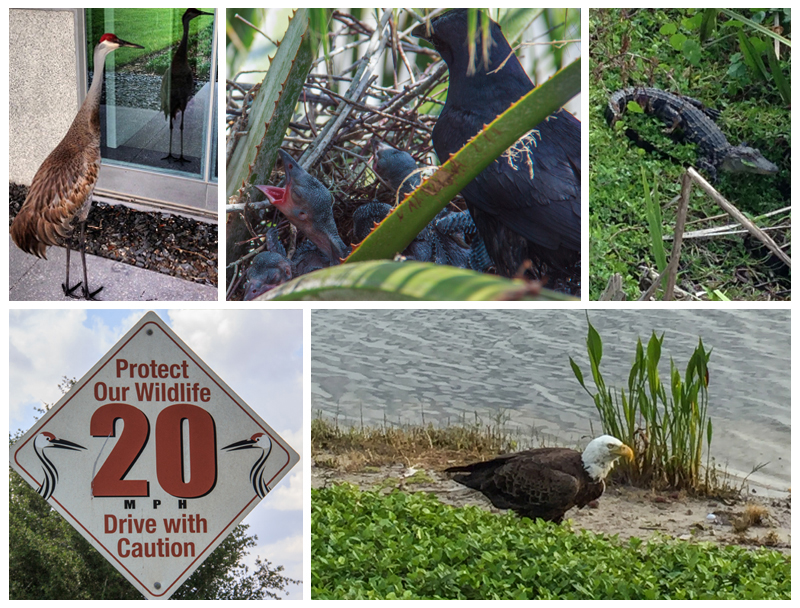