Don’t React to Change, Respond to It

By: George Chavel
Oct 19, 2015 12:00 PM ET
Tweet This:
Good Leadership is being responsive to #change. Change Management is not a reaction. http://3bl.me/y33d87 @SodexoUSA #changemangement
Blog
Don’t React to Change, Respond to It

One of a CEO’s toughest but most crucial roles is overseeing change within an organization. It’s not just a matter of making the tough decisions that change requires, but about being able to see the change approaching. Whether it’s change a company has chosen, or one that’s forced upon it, the process can only be guided by a leader who can effectively balance the public and human sides that change brings.

This style of leadership cannot be delegated. The CEO has to lead the change. I’ve seen too many cases in my career where great conversations happen in the boardroom and then they merely assign people to do certain pieces of it. To really materially move an organization toward whatever is needed around a change management approach – whether it’s behavior, or culture, or business model, or competitiveness – the CEO has to do that.

People typically hate change. That’s human nature, but it’s what must be considered when communicating details of change. This requires something else: transparency.  A CEO must be transparent at all levels in communicating the reasons behind a change within the corporation and what can be expected from the outcome. Often it’s your front-line employees who will feel the most dramatic impact of full scale change. It’s essential to communicate with them throughout and to gauge how their world is changing.

Sometimes it’s fair to admit that senior managers may not always know what the end of change will look like. They may have a theoretical idea and they may have strong good intentions but once you launch into a journey of change there will be unintended consequences. There will be uncontrolled events that can bring a perception that there’s not transparency, so be very honest at all levels and at all milestones of the change. If the course needs to be corrected, then correct it and communicate why.

Change management is not a reaction, it’s a response and there is a big difference. Every CEO has to have the right balance between the appropriate response and the appropriate link to the strategic plan. If something arises that is not in your strategic plan, it’s your duty to pause and test yourself by asking if the change is happening for the right reasons. Are you reacting to something, or is it part of your strategy? Have you created the strongest foundation possible to support effective change?

So how do you know when it’s time to change? There are certainly competitive facts and market dynamic swings and a really well done strategic plan can bring clarity on the time to change. There’s the old saying that ‘if it ain’t broke, don’t fix it’ but that’s not realistic in the modern corporate world. In my career when all of the dials on the dashboard and all of the measurements and all of the scorecards have been great and you look at a quarter or a year-end and you say ‘wow, everything is great. I should take an extended vacation,’ it’s usually a red flag that it’s time to change.

Business models must be nimble. Organizations must be prepared to adapt every day and this culture of constant change should not be intimidating, it should be invigorating.

Connect with me on LinkedIn to share your experiences with Leadership & Change.

George Chavel is CEO of Sodexo North America (U.S. and Canada) and CEO Sodexo Healthcare Worldwide. He has announced that he will retire at the end of this calendar year after more than two decades at Sodexo. 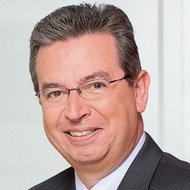