Fx Reshaping Hollywood with Big Push for Diversity Behind the Camera

For CEO John Landgraf and his team of showrunners at FX Networks, the best way to produce TV series of the highest quality is to hire diverse voices behind the camera.

"We want to make the best television possible," Landgraf said in a recent interview with Variety. "We should be drawing on the entire available pool of storytellers and directors, and we should be expanding that pool and trying to hire the very, very, very best people. That's our job."

Landgraf dedicated a sizable portion of his August 9 session at the TCA Summer Press Tour to this issue of diversity in Hollywood, announcing that the network has dramatically expanded opportunities for diverse directors. Currently, 51% of the directors hired to work on FX and FXX shows during the 2016-2017 season are women or people of color.

"If part of how people are getting jobs is that they're white males, and there's a sort of a lethargy or an inertia around that, and therefore we're not looking at the entire available pool of human talent, then we're squandering talent. Period," Landgraf said. "We're squandering the talents of women and minorities, and we're not fielding the best team. The way this change happens is that the industry decides it wants to field the best team and it wants to do what it needs to do to field the best team."

At FX, the process of making changes began in the director's chair. The company made a concerted effort to diversify its portfolio of storytellers, with Landgraf reaching out to each of the showrunners on the network's 17 series and urging them to fill the upcoming season's 170 available director slots with women and people of color. Of the 149 spots that have been filled so far, 73 helming jobs went to white men (49%), 32 spots went to men of color (21%), 11 to women of color (7%) and 33 to white women (22%).

Landgraf acknowledged that long-term, systemic shifts in the industry at large would take time but that meaningful effort is required in order for progress to be made.

"It's just a matter of will, and it can be done. Nobody really can say, 'It can't be done,' or 'It'll take 10 years to do it.' It can be done now," Landgraf said. "We hope the example of FX more than quadrupling our percentage of diverse and female directors in such a short time sends a message to our whole industry that it is well past time for change to happen--and that it is only a matter of re-thinking our priorities and of putting in the collective effort for us to make it so." 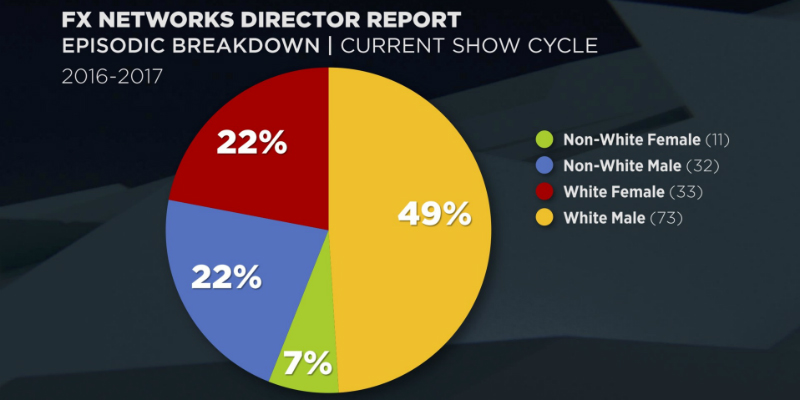