While climate action on individual levels is important, our daily carbon emissions are dwarfed by those of global businesses. A website called ClimateCounts provides data and channels for consumers to let corporations know that we are judging, and spending our dollars, based on companies' climate performance.

Which Companies Succeed...or Fail?
Climatecounts.org's mission is to "fight climate change by helping consumers use their choices and voices to put pressure on the world's largest companies to take corporate climate action." The goal is to encourage corporate climate responsibility and conscious consumption. The website and related smart phone app allows consumers to check the performance of companies in 17 categories, from Beverages to Commercial Banking to Media to Pharmaceuticals, for their climate impact.
The ratings give points for:

About ClimateCounts.org:
Climate Counts is a non-profit campaign that scores companies annually on the basis of their voluntary action to reverse climate change. The Climate Counts Company Scorecard -- launched in June 2007 -- helps people vote with their dollars by making climate-conscious purchasing and investing choices that put pressure on the world's most well-known companies to take the issue of climate change seriously. Launched by organics pioneer Stonyfield Farm, Climate Counts believes everyday consumers can be the most important activists in the fight against global warming. Climate Counts has currently evaluated nearly 150 companies in sixteen major consumer sectors with plans to expand the number of companies and sectors. Climate Counts' work has appeared in many of the world's leading media outlets, among them the New York Times, National Public Radio, The Economist, BBC World Service, the Wall Street Journal, Newsweek, The Huffington Post, and the Harvard Business Review. The organization launched its free iPhone app and its Climate Counts Industry Innovators (i2) program in early 2010. 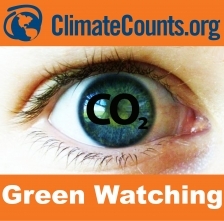