To thrive in Africa, companies must widen the talent pipeline.
Jul 23, 2015 10:30 AM ET
Tweet This:
How can companies grow in Africa? Kristin M. Lord of IREX explains: http://buff.ly/1MfLYmG
Blog
Longitudes

Global companies are grappling with a paradox. On the one hand, they struggle to hire people with the right mix of education and skills.

On the other hand, they work in societies with persistently high levels of unemployment, particularly among young people.

Indeed, a recent McKinsey study found that almost 40% of employers surveyed around the world say a lack of skills is the main reason for entry-level vacancies.[1]

Making the bulge a boom

The challenge is particularly acute in Africa, which is both a growing market for companies and a home to one of the world’s fastest growing youth populations.

Africa’s burgeoning youth population is often referred to as a youth “bulge” — but it could just as easily become a “boom.”

They present an enormous opportunity for global companies – not to mention the future of Africa. But companies, and Africans themselves, will only reap this dividend if they are able to seize this opportunity and productively employ this large generation of young people.

The competition for talent in Africa is already intense. Global companies report that they cannot hire enough qualified people to staff their growing operations. They also report that education systems are not producing the kind of employees they need.

Meanwhile, demand for professional development is enormous among rising generations of leaders.

My organization, IREX, runs the Mandela Washington Fellowship – the signature program of the Young African Leaders Initiative – on behalf of the US government.

This initiative brings 500 rising leaders, aged 25-35, to the United States for intensive leadership training tailored to their roles in the private, non-profit and public sectors.

The fellows then receive a year of professional development training, mentorship, and networking after they return to Africa.

The fellows are the crème-de-la-crème of the African talent pool and companies are eager to recruit them. But the demand, from both potential fellows and employers, vastly exceeds the supply.

In the last two years alone, we received 80,000 applications for 1,000 available spaces – despite limited marketing for this very new program.

More than 50 private sector employers in Africa have expressed interest in partnering with us to improve leadership and employment opportunities.

It is time for companies to seize the initiative and address both their own talent shortage and the broader skills gap across the continent.

Instead of expending resources to compete ever more fiercely for the small number of already qualified employees, both employers and employees would be better off if companies used their resources and clout to widen the pipeline of talent.

What can companies do?

First, they can join forces with other employers to share the costs of increasing the pool of qualified employees in the short and medium term.

When investing in programs that build the capabilities of the workforce, they should focus not only on the specific technical needs of their own companies but on the “soft skills” that increase the odds of workplace success across organizations and industries.

According to a June 2015 report by USAID, ChildTrends and FHI360, these “soft skills” include social skills that help people work well with colleagues; oral, written and non-verbal communication skills; higher order thinking such as problem solving, critical thinking and decision-making; self-control; and a positive self-image that includes self-confidence, self-awareness and a sense of pride.[2]

Second, they can initiate and participate in coalitions of private companies, governments, educational institutions, and non-profit organizations to close the gap between workforce needs and the supply of qualified workers.

Such coalitions hold the potential to strengthen educational institutions in ways that reliably meet the needs of employers in the medium term and long term.

They can build on existing organizations – such as the Alliance of International Youth Development, which I co-chair – or informal “coalitions of the willing” that join together informally around specific initiatives.

Third, they can build pipelines of talent within their own organization – including through less traditional pathways. UPS is already a model in this respect, promoting talented people from positions driving delivery trucks into management and even executive positions.

If other companies followed this model, they would find it easier to fill their leadership ranks and contribute to the development of whole workforces in the process.

By widening the talent pipeline, companies are likely to reap a tangible double reward: meeting short term workforce needs and contributing to long-term economic growth and dynamism that will increase demand for their products and services.

Furthermore, they are likely to benefit from the overall goodwill created from investing in the potential of Africa’s young people – and, in the process, create a better future for us all.

[1] Education to Employment: Designing a System that Works. McKinsey & Company 2012.

Kristin M. Lord is President and CEO of IREX, a global non-profit organization specializing in international education and development. 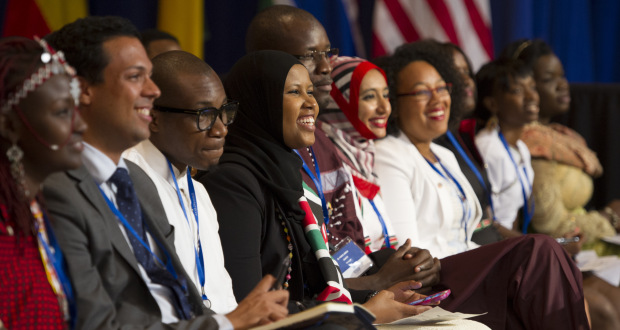