What do Walmart, Costco and Apple have in common besides selling cell phones and computers? These iconic brands, and many others like them, are all investing big in solar energy.
Oct 21, 2014 12:20 PM ET
Tweet This:
.@GM FastLane: Guest Post: Top U.S. Companies Increasingly Turning to Solar Energy http://bit.ly/124F407
Blog
Originally posted on FastLane

Today, 129 million Americans – more than 40 percent of our nation’s entire population – live within 20 miles of a solar-powered business.  And that number has doubled since 2012.

Did you know that Apple is generating enough solar electricity to power 30 million iPhones?  Or that Fed-Ex’s savings from solar is the equivalent of delivering 15 million packages?

Reflective of the growing popularity and increasing growth of solar nationwide, many of America’s leading Fortune 100 companies continue to significantly ramp up their use of clean solar energy, according to the 3rd annual Solar Means Business report, which was released recently by the Solar Energy Industries Association (SEIA).

These forward-looking companies are helping to create thousands of American jobs, boost the U.S. economy and improve our environment.  The commercial solar systems currently in operation by the Top 25 corporate solar users are generating enough clean electricity to prevent 549,296 metric tons of damaging carbon emissions from being released into our air.  That’s the equivalent of saving nearly 62 million gallons of gasoline.

Combined, these blue chip companies have deployed 569 MW of solar capacity at 1,100 locations – a 28 percent increase over a year ago and a 103 percent increase since 2012, when the first report was released.  Representing a “Who’s Who” of the corporate world, these companies are playing an increasingly important role in the development, expansion and promotion of solar nationwide, while also reducing their operating expenses, benefiting customers and shareholders alike.

“Going solar is a smart way for these blue chip companies to increase value for their shareholders,” said Nat Kreamer, CEO of Clean Power Finance and SEIA Board Chairman. “Businesses are dealing with higher and more volatile electric rates. At the same time, price declines and financing innovations have reduced the upfront cost of solar. These and other factors make solar a sound business decision today, and consistent policies at the state and federal levels will make solar a top three energy source for the U.S. in the future.”

Today, IKEA leads all companies in the percentage of their facilities that are solar powered, with nearly 9 out of 10 stores now utilizing clean, reliable and affordable solar energy.  General Motors is next in line at 43 percent – ahead of retail giants Walmart, Target, Kohl’s and Macy’s.

According to the report, the “growing adoption of solar by the commercial sector is predominantly the result of consistent price declines.  The average price of a completed commercial PV project in Q2 2014 has dropped by 14 percent year over year and 45 percent since 2012.  As solar prices continue to fall, more businesses in more states turn to solar to cut operating costs.”

For more and more American companies, solar makes sense.  It saves money for customers and shareholders, while helping to reduce pollution and protect our environment.  In business, that’s known as a doorbuster deal! 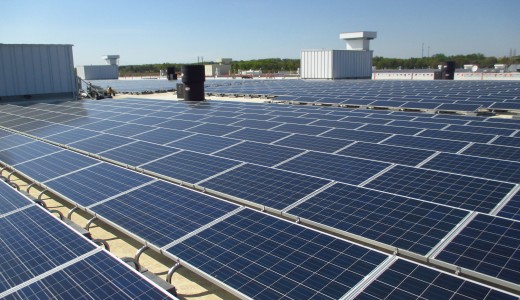