Kenneth Cole and HRC Partner in Celebration of Marriage Equality

Originally Published on the HRC Blog

Famed designer and activist Kenneth Cole once again joins the Human Rights Campaign (HRC) in raising awareness for marriage equality for everyone, everywhere. The limited-edition t-shirt design also marks the one year anniversary of the Supreme Court's historic 2013 marriage rulings.

Designed by Kenneth Cole, the t-shirt features a red HRC equal sign logo inlaid with the text "Unite The States of America ... Support Marriage Equality for all of U.S." as a visual reminder of the inequality that still exists in the United States. “For 25 years the company has been advocating for equal rights,” says Kenneth Cole.  “Many states have passed marriage equality laws, we hope our shirt will remind people that marriage is still not an option for all and in turn help to Unite the States of America."

Despite unprecedented public support for marriage equality, only 19 states plus the District of Columbia give same-sex couples the freedom to marry. With 60% of self-identified Republicans under the age of 30 and a record 59% of all Americans supporting marriage equality, it is clear that the arc of history is swiftly bending in favor of LGBT equality. Beyond the polls, marriage rights are still denied to committed and loving gay and lesbian couples in 31 states across the country while over 70 cases challenging state marriage bans work their way through the courts.

"In the year since the Supreme Court's historic marriage rulings last year, we have made incredible advances toward fairness and equality across this great nation," said HRC Creative Director Don Kiser. "We are honored that once again Kenneth Cole is standing with us on the right side of history."

Offered on a super-soft cotton blend tee, the crew neck t-shirts retail for $35 and will be available on shop.hrc.org, and in HRC stores in Provincetown, MA; San Francisco, CA; and Washington, D.C. To raise even more awareness, employees in all 99 Kenneth Cole retail and outlet stores nationwide will be wearing the limited-edition tee. In addition, signage will also appear in all Kenneth Cole retail and outlet stores throughout the month of June. 100% of the proceeds from the sale of this shirt go to support HRC's fight for LGBT equality. 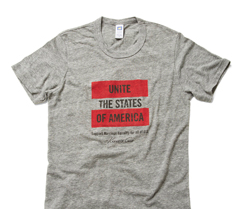