For the past couple of summers, our family has watched as construction workers ferried back and forth between Rhode Island’s Point Judith and a wind farm being built off nearby Block Island.

We knew the turbines would be spinning soon when the main highway traversing the peninsula was gouged to make way for a cable that would bring ashore any surplus electricity not consumed by Block Island residents and businesses.

For the sustainarati in the Ocean State there is clearly a sense of pride that the United State’s first offshore wind project got approved and built there. National Grid is the project’s onshore partner

While I remain thrilled about the five-turbine, 30-megawatt Deepwater Wind Block Island Project, a trip to Scandinavia this week provided a humbling lesson about how absolutely massive offshore wind projects are elsewhere in the world.

DONG Energy, Denmark’s largest electricity producer, was eager for attendees at the Sustainable Brands Copenhagen conference to visit the third largest such facility in the world – the 111-turbine Anholt Offshore Wind Farm built in 2013.

To experience the size and scope of the installation, DONG Energy arranged for a small group of us to hop aboard a 12-passenger float plane for an aerial tour.  The company’s sustainability communications chief, Filip Engel, borrowed the pilot’s headset to share some impressive statistics:

The economics of solar and offshore wind are closely watched by investors. Engel contends an inflection point is nearing, when production of those forms of green electricity will cost less than fossil fuels.

DONG Energy, which went public in June, still burns coal and natural gas.  So-called black energy comprised 85 percent of its portfolio when the company was formed eight years ago; today that number is less than 50 percent and falling, due to massive investment in wind, said Engel.

The largest offshore wind farm globally is expected to be DONG Energy’s Hornsea Project One, a 240-turbine development set for completion in 2020 in the North Sea off England’s Yorkshire coast and covering approximately 407 square kilometers.

Gosh, that’s a tenth the size of Rhode Island. 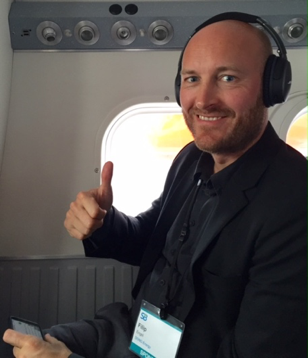 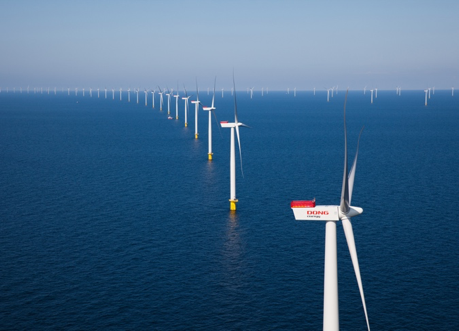