How the Next Generation is Leading by Example
Mar 27, 2013 7:00 AM ET
Tweet This:
Is a 15-year-old ahead of @Apple and @Yahoo on #climate leadership? http://t.co/bpR6qkWCaf via @guardian #green #csr #sustainable
Blog
15-Year Old Trumps Apple, Yahoo on Climate Leadership

This article first appeared in the Guardian on Tuesday, March 26.

A young girl with a unique name made headlines last week when 12,000 people signed her petition to keep climate change in the UK national curriculum.  For Esha Marwaha, a 15-year-old west London student, climate change isn’t just an environmental cause; it is the unwelcomed burden of cleaning up after the crotchety old bastard who dumped trash on her lawn. In her eyes, it would be illogical to leave the problem to fester unattended in hopes that her future children would one day properly dispose of it.

How is it that a teenager can be so clued in to a macro concept like climate change while government leaders and titans of industry remain blissfully impotent on the subject?

Last week, Apple applauded itself for reducing energy usage by 21.5 percent per dollar of revenue since 2008.  Meanwhile, the company’s absolute emissions rose 34 percent in 2012 alone.   As a wise man once said, if you’re heading toward a cliff and you reduce your speed from 100 km/h to 50 km/h, you haven’t done yourself much of a favor.

One might argue that Apple’s only sin is making investors incredibly wealthy by way of creating a universe of i-crazed gadget mongers.  Indeed, there is no crime in being profitable – the world needs stuff, just as people need jobs; Apple provides a great deal of both.

But the world also needs its most recognizable brand and modern-day mecca of innovation to demonstrate at least token leadership on a daunting societal challenge like climate change.

2. Replacing its founding CEO Steve Jobs with Tim Cook who pledges eco-responsibility, yet remains mute in calling for federal carbon policy, and

3. Coming in last out of 15 technology companies on the 2012-13 Climate Counts company scorecard for having a less-than-stellar, company-wide carbon strategy

Leadership is a 15-year old who petitions her government, not a global behemoth that slinks down the hallway with his hands in his pockets.

So how does Apple compare to, say, the likes of Yahoo Inc. when it comes to addressing climate change?   Last year Yahoo made impressive strides on their 2014 goal to reduce the carbon intensity of their data centers 40 percent from 2009 levels.  The company also stood alongside Nike, Stonyfield Farm, and Levi Strauss, among others, to support the extension of a federal wind energy production tax credit in the U.S.

To be fair, greenhouse gas emissions from employee commuting and business travel only accounts for about 55,000 metric tonnes of Yahoo’s greenhouse gas emissions, compared to the 370,000 metric tonnes needed to power Yahoo’s data centers (according to the most recent emissions data on CDP).  However, the move to eradicate employee telecommuting flies directly in the face of rational decision-making from both a cost and carbon management perspective.

Depending on the study, employee productivity is said to increase 10 – 50 percent from teleworking while companies save $10,000 per employee per year from reduced energy and office management expenses.  On the emissions side, with 3.9 million Americans working from home at least once a week, teleworking leads to nearly 840 million gallons in reduced fuel consumption – the equivalent of taking two million cars of the road each year.

But none of these numbers matter if the CEO lacks perspective, and, somewhere along the line, perspective on our little climate debacle became muddied by politics and abstraction.  Today, it isn’t enough to say that the burning of fossil fuels is disrupting the natural balance of our atmosphere and we need all leaders on deck – corporate leaders, government leaders, movies stars, porn stars, sports heroes, music icons and leaders of the Esha Marwaha variety– to stop it.  How can that be?  This isn’t about some no-name species of fish heading for extinction; this is about a massive upheaval of our earth’s ecosystem.

As with Apple’s Tim Cook, Marissa Mayer has a job to do that dictates her priorities as a leader; a job that is more apt to carry with it the mantra “stop the bleeding, right the ship” than the more utilitarian “move mountains, save the world.”

If Mayer is to fare better in her role as CEO than her predecessors (since 2005, Yahoo has had seven different CEOs), she’s faced with a short runway to gain the respect of employees and the confidence of shareholders.  Similarly for Apple, Tim Cook wants to show that a Steve Jobs-less Apple can make the same hay as its founder.  But should that preclude these highly visible members of society from personifying top-down leadership on climate change and sustainability?  Not in the least. In fact, it might be a welcome differentiator when it comes time to assess their legacies.

In our hyper-paced world, constant noise provides good cover for those who aren’t willing to stand and be counted.   Perhaps someday, when Esha Marwaha is CEO, this will no longer be the case.

Mike Bellamente is the director of Climate Counts, an organization that brings consumers and companies together in pursuit of solutions to climate change. In February 2012, Bellamente was named to Ethisphere’s 2011 list of 100 most influential people in business ethics. 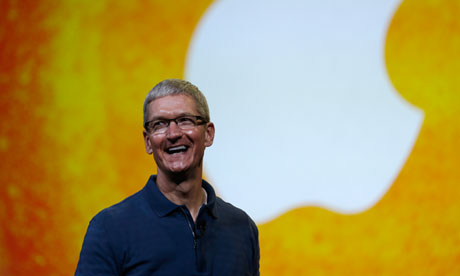