One of the best punchlines delivered so far at BSR Conference came from New York Times sustainability reporter David Gelles when panelists were asked to recommend new breakthrough communications techniques.

“If I could briefly plug print advertising,” Gelles said, referring to a full-page ad that appeared on the back of the Times business section today from the office chat platform Slack, which used the space to deliver an open letter to Microsoft.

“That’s the breakthrough technology we’re talking about?” quipped BSR Managing Director of Communications Melanie Janin, who followed up by asking Gelles how much the Times charges for a full-page ad.

Jokes aside, Gelles maintains the ad sparked considerable buzz about Microsoft’s entry into the workplace collaboration space occupied by Slack.  He would not comment on the presumably hefty price tag for the print ad.

The reporter, whose Sunday New York Times “Revalued” column focuses on corporate responsibility and sustainability, likely disappointed many of the communications execs when he outlined his criteria for pitching stories.

Big brands, big industries and big issues are appropriate fodder for Revalued.  But pitches need to demonstrate something new, a big step beyond what has been done previously. He’s also looking for tension and access to executives willing to talk openly about their internal deliberations and struggles around messy topics.

“Every story I write isn’t going to make the subject of that story happy. I think that’s healthy,” said Gelles, pointing to a recent barbs aimed in the direction of large brands touting social and environmental achievements.

Gelles empathized with nonprofits, which struggle to get coverage from the New York Times.  Anything less than a $100 million grant from a celebrity philanthropist doesn’t generally elicit a response, he said.

Others tips from the BSR session “Beyond ‘Going Viral’: Breakthrough Communications” include: 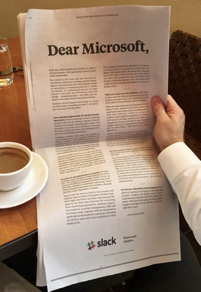