The following is part 1 of a 3-part series on “Big Data.”

“Big Data” is a useful tool for rating corporate social responsibility (CSR) and sustainability performance.  We believe that the Big Data system that CSRHub has developed is one answer to dealing with the rise in new ratings systems (it seems there is a new one announced each month) and with the disparities in scores that occur among these different systems.

In 2001, Doug Laney (currently an analyst for Gartner), foresaw that users of data were facing problems handling the Volume of data they were gathering, the Variety of data in their systems, and the Velocity with which data elements changed.  These “three Vs” are now part of most definitions of the “Big Data” area.

Ratings in the CSR space appear to be a candidate for a big data solution to its three “V” problems.

Most systems for measuring the CSR and sustainability performance of corporations rely on human-based analysis.  A researcher selects a set of companies to study, determines the criteria he or she wishes to use to evaluate their performance, and then collects the data needed to support the study.  When the researcher can’t find a required data item in a company’s sustainability report or press releases, he or she may try to contact the company to get the data.

Some research firms try to streamline this process by sending out a questionnaire that covers all the things they want to know.  Then, they follow up to encourage companies to answer their questions and follow up again after they receive the answers, to check the facts and be sure their questions were answered consistently.  An NAEM survey showed that its members were seeing an average of more than ten of these results in 2011. This number has continued to grow and some large companies say they receive as many as 300 survey requests per year.

Both the direct and survey-driven approaches to data gathering are reasonable and can lead to sound ratings and valuable insights.  However, both are limited in several important ways:

It may be useful to take a look at some details of one company’s approach to a “Big Data” based analysis of CSR ratings. Our next post explains how CSRHub applies its methodology to address “Big Data” problems while also noting that every system has some limitations.

CSRHub provides access to the world’s largest corporate social responsibility and sustainability ratings and information.  It covers over 17,400 companies from 135 industries in 134 countries. By aggregating and normalizing the information from 530 data sources, CSRHub has created a broad, consistent rating system and a searchable database that links millions of rating elements back to their source. Managers, researchers and activists use CSRHub to benchmark company performance, learn how stakeholders evaluate company CSR practices, and seek ways to improve corporate sustainability performance. 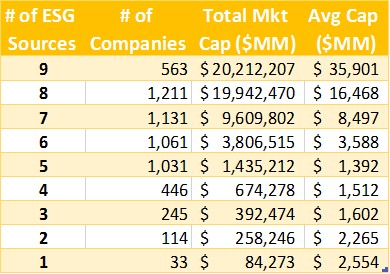