Back in May I was invited to Singapore to tour schools, IT hubs, hospitals and startups. The size of the country, as well as their government structure, allows them move towards their objectives more quickly than other countries. What I witnessed during my visit was a nation determined to be seen as a leader in the technology sector and to be recognized as a nucleus for some of the top innovators in the world.One aspect of the trip that really resonated with me was the country's use of vertical farming and other cutting edge agricultural techniques.

The World Health Organization estimates that by 2030, 60% of the world’s population will be living in urban areas - and that number will only continue to grow. Food security is often an overlooked subject when discussing the resiliency of a region as the focus tends to lean more towards infrastructure such as buildings, roads, and bridges. But without food, even a strong infrastructure won’t be enough to sustain a growing population.

With a total landmass measured at 177,664 acres, the wealthy nation of Singapore can only account for about 250 acres of farmland - not nearly enough land to feed its population of more than 5.47 million people.

According to the Agri-Food and Veterinary Authority of Singapore, the city-state imports over 90% of their food - some from as far away as the U.S. Uncertain political landscapes, disease outbreaks or port closures could all affect the delivery of food to Singapore, all of which reinforces the urgency that they look to alternative farming.

Vertical gardens are nothing new, but Singapore is being forced to look them more creatively - as a way to solve real issues they are having with land scarcity and food shortages.

You can travel to many countries around the world and see them being used inside restaurants, shopping malls, offices, and private residences. Aesthetically, they can add a sense of peace to stress-filled environments. Scientifically, they help with the removal of VOCs in the air, create better acoustics, and are helpful with thermal regulation. But some companies are looking to take these gardens to another level and provide some relief and innovation where food scarcity is concerned.

Aiming to be known as a “City in a Garden,” Singapore is celebrated for their use of vegetation in architecture. Vertical farming seems to be an obvious next-step to solving the land and food scarcity issues they are currently facing.

Operated by Sky Urban Solutions Holding Ltd., plants at Sky Greens rotate on an innovative patented system that produce 5 to 10 times more food than conventional methods of farming, using the same area of land and 75% less labor. The system uses no herbicides or pesticides - only organic fertilizer.

Each tower is 9 meters tall and consists of thirty-eight shelves containing 8 trays each, holding approximately 2,500 plants. Running on a ½ HP motor, it takes sixteen hours for one tower to complete a rotating cycle and uses only 40W of electricity (equivalent to one light bulb). Artificial lighting is not necessary as natural sunlight is utilized in the system.

Plants are irrigated and fertilized using a flooding method and it takes only ½ liter of water to rotate one 1.7 ton tower. The water is housed in an enclosed underground reservoir system and is recycled and reused. The facility also employs a 60kw solar array that produces 15% (sometimes more) of the electricity used onsite.

In 2015, investments in Agriculture Technology grew to $4.6 billion with investors participating from all over the world. Startups like Archisen are taking advantage of this and looking to utilize Internet of Things capabilities and data analytics to improve the productivity of modern tech-based farms.

Using sensors, cloud-based software, and crop-specific analytics, the system is able to provide real-time data on microclimates and nutrients. That data is then passed along to both the farmer by way of a mobile app, as well as directly to the growing system. (See the "System Architecture" photo in the carousel below).

Urban farming is far from being perfected. The initial start-up investment in the technology alone can be extremely expensive. But for places like Singapore with its growing population and in California where dwindling water supplies are not being replenished, what other choice is there?

Fifteen years ago the leadership in Singapore set a goal of becoming the best researchers in the world. They have come close to this, if not succeeded, by investing billions on R&D over the last decade. They are now looking towards becoming the premiere ecosystem for startups setting aside over $19 billion (SGD) over the next 5 years to invest in worthy candidates. And with over 20,000 startups less than 5 years old (60% of them are in the InfoComm sector), they are well on their way.

Singapore isn't the only country looking to use vertical farming to help solve local issues. In California, where agriculture accounts for 80% of water usage, this sister and brother team is looking at ways to make food more sustainable.

Recognizing an opportunity to change the global agricultural landscape and help feed the world in a sustainable fashion, the Horton Family turned their passion into a family affair. Ed Horton is Founder and CEO while his wife, Rosie, is the Director of HR. Their daughter, Danielle, is Director of Marketing, and son, Edwin, is a grower. They started Urban Produce and began actively testing their High Density Vertical Growing System to see how it could help globalize locally grown produce.

Located in California, the Urban Produce system was designed with water conservation in mind. Units are built with an Atmospheric Water Generator that allows them to create their own water by collecting humid, ambient air in the growing unit, and condensing it and cooling it to create water. They claim it uses 93% less water than a traditional farm producing a similar yield. The patented and trademarked system provides approximately sixteen acres to grow food in - and the ability to manufacture up to 1 million pounds of produce annually (depending on what is grown).

Transportation is also an issue In the U.S. where, on average, food travels around 1400 miles prior to consumption [source: USDA]. The plants grown by Urban Produce continue to grow as they are transported because they're still rooted to the substrate when delivered. They use no pesticides, 80% less fertilizer than traditional farms, and the product is USDA Certified Organic.

The system is fully automated and can be controlled remotely. It is integrated with a proprietary software control system that is programmed to provide tailored water and nutrients to each plant species. Seeded trays on 25 rows are stacked vertically on a hanging carrier. The trays rotate along a conveyor to ensure proper air flow, light distribution, and adequate water and organic nutrient delivery. 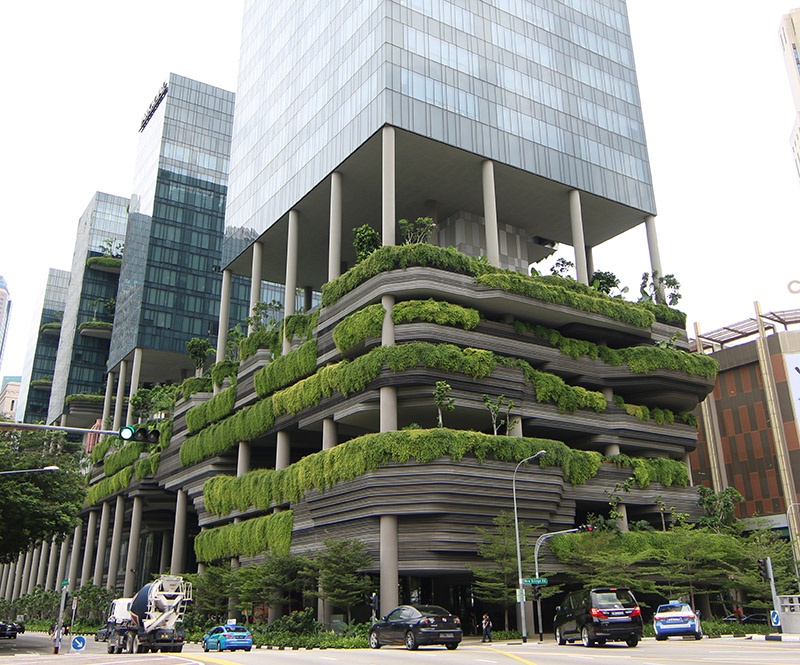 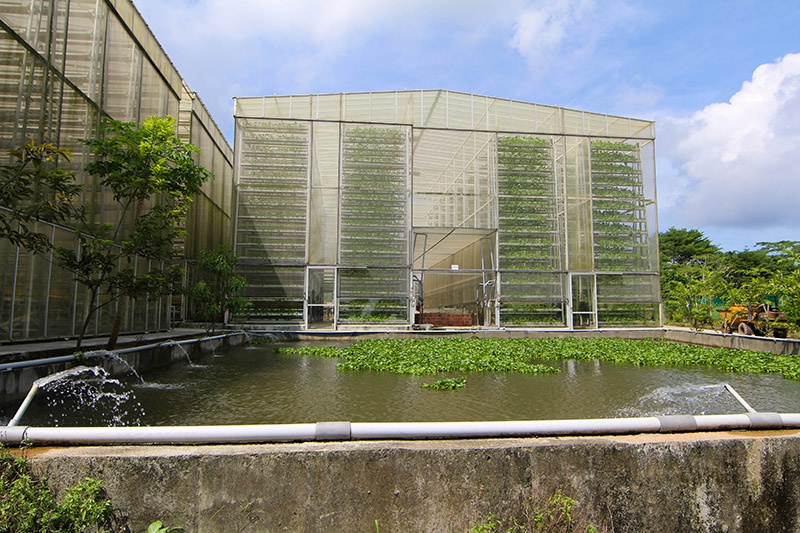 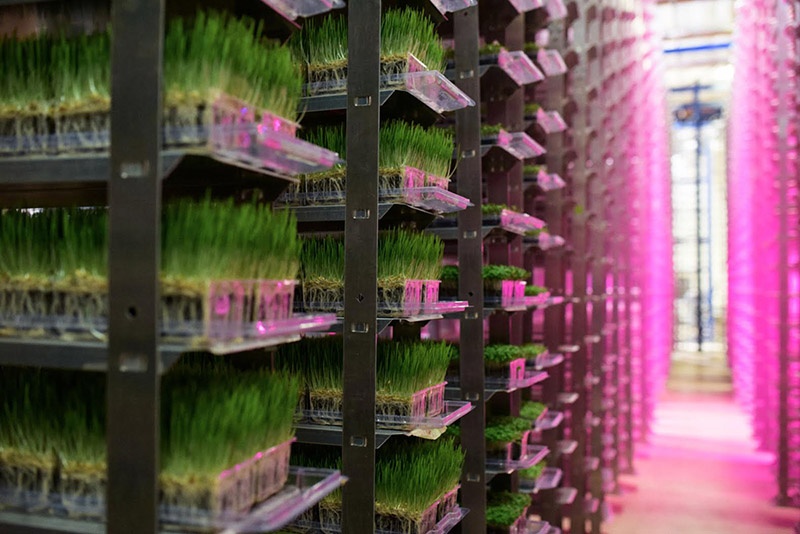