Launched last year by Ceres, a nonprofit sustainability advocacy organization, and its business network, Business for Innovative Climate & Energy Policy (BICEP), the Climate Declaration has more than 750 signatories nationwide, and 140 in California, including iconic brands like General Motors, Unilever, Gap Inc., and eBay Inc. The California signatories have added their own special message to the declaration for Washington:

“As the world’s 8th largest economy, California is a champion of clean energy progress and innovation,” states the declaration. “Thanks in part to its smart energy policies including its landmark climate law, AB32, California has been a global leader in job creation, clean energy investments and GDP growth.”

California leads the nation in renewable energy development, with more than 43,700 jobs in 2012 in the solar industry (one-third of all solar jobs in the U.S.) and more than 7,000 jobs in the wind industry. In 2013, the state doubled its solar rooftop installations, from 1,000 megawatts to 2,000 megawatts. It also ranks 48th in the country in per capita energy consumption, due in part to the state’s strong energy efficiency programs.

“The 140 plus California companies which have signed the Climate Declaration see the financial upside of tackling climate change today, both for their own bottom lines and the overall economy," said Anne Kelly, director of policy and BICEP at Ceres, a Boston-based nonprofit sustainability advocacy group. “We welcome them, invite others to come on board and applaud the state of California for its bold steadfast leadership on climate and energy policy.”

“Climate change is causing more frequent extreme weather that is harming businesses and our economy. I am proud to stand with this coalition of forward-thinking businesses who are seizing this economic opportunity to prepare for the negative effects of a changing climate while also advocating for concrete actions to be better stewards of our environment.” – Rep. Scott Peters (CA-52)

Among those is Sungevity, a Bay-Area based solar provider whose workforce has grown from four to about 400 since 2007. The company has operations in nine U.S. states, the District of Columbia, Europe and Australia, and its global network of customers has offset over 100 million pounds of carbon emissions to date.

“Actively addressing climate change is the biggest economic opportunity of our time,” said Danny Kennedy, co-founder of Sungevity and author of Rooftop Revolution, How to Save Our Economy – and Our Planet – from Dirty Energy. “Sungevity’s rapid growth is proof positive that the solar service sector can spur the economy with high-paying jobs that cannot be easily off-shored, particularly in sales, service and maintenance.”

Another signatory, Los Angeles-based KB Home (NYSE:KBH), one of the nation’s largest homebuilders, has built more than 80,000 ENERGY STAR® certified homes since 2000, saving homeowners an estimated $36 million on their energy bills in 2013, while preventing greenhouse gas emissions equivalent to roughly 39,000 vehicles. The company also has an extensive solar initiative that has already led to the construction of 2,200 solar homes. The company’s new homes also have water-conserving features that help homeowners save an average of 30,000 gallons of water and $300 annually. KB Home is also currently experimenting with advanced water recycling technology and installed its first system on a net-zero home in Southern California.

“KB Home has strategically focused on increasing the environmental performance of every home we build, and today we are proud that our efforts have already helped thousands of our customers save water, energy, and money on their utilities,” said Dan Bridleman, senior vice president of sustainability, technology and strategic sourcing at KB Home. “We believe that continuing to expand upon our industry-leading commitment to sustainability is the right course for our business, our buyers, and our planet.”

San Diego-based Sapphire Energy is pioneering an entirely new industry—Green Crude—that enhances and replaces petroleum-based products with a low carbon, renewable, and scalable fuel. Unlike traditional biofuels, Green Crude products and processes are made solely from photosynthetic microorganisms (algae and cyanobacteria), using sunlight and CO2 as their feedstock. They are not dependent on food crops or valuable farmland, or use potable water. Sapphire has a research and development facility in Las Cruces, New Mexico, and is currently operating the first Integrated Algal BioRefinery in Columbus, New Mexico.

“Sapphire Energy has always been dedicated to developing a price-competitive, low carbon, renewable source of energy that hastens energy independence and is 100 percent compatible with existing refinery and transportation systems,” said Tim Zenk vice president of corporate affairs at Sapphire Energy, Inc. “Today, with legislation like AB32 and the Low Carbon Fuel Standard (LCFS), we see California as on track to be a leader in addressing climate change, setting an example for the country on how to leverage sustainable, economically viable opportunities that will help to protect our environment for future generations.”

Clean tech companies like Sapphire Energy were estimated to have contributed more than $1.4 billion in economy activity and close to 5,000 jobs to San Diego in 2011, according to CleanTech San Diego. (This includes biofuel; clean transportation; energy storage, efficiency and smart grid; and solar energy companies.)

“Thanks to AB 32 and California's forward thinking energy policies, San Diego is poised to lead the nation in job-creating clean energy technologies,” said Jason Anderson, president CleanTech San Diego. “California’s experience proves that the choice between a robust economy and a vibrant environment is a false one.”

The San Diego International Airport was the country’s first major airport to adopt a formal sustainability policy in 2008 and is actively pursuing efforts to reduce greenhouse gas emissions and achieve LEED certification in all new construction.

“We are proud that the San Diego International Airport is the first airport in the nation to sign the Climate Declaration,” said Thella F. Bowens, President/CEO of the San Diego County Regional Airport Authority, owner and operator of the airport. “We are pleased to join other signatories from the private and public sectors, from California and across the nation, in this unified and steadfast commitment to sustainability.”

Beyond signing the declaration, or taking their own steps to become more sustainable, many of the company signatories are engaging further with policy makers. Seventy percent of the major company signatories (those with over $100 million in annual revenues) have expressed their views on the need for climate policy by lobbying on Capitol Hill, sending a letter, and/or engaging with the public through social media.

“We see the dire impacts of climate change happening now,” said Hans Cole, Environmental Campaigns and Advocacy Manager, Patagonia, Inc. “California’s decreased snow pack in the mountains and corresponding water scarcity will affect everyone. But, there is an opportunity to spur innovation, shift policy and steer a different course. We will continue to support this movement and effective solutions at the state and federal levels.”

About Ceres
Ceres is an advocate for sustainability leadership. Ceres mobilizes a powerful coalition of investors, companies and public interest groups to accelerate and expand the adoption of sustainable business practices and solutions to build a healthy global economy. Ceres directs the Investor Network on Climate Risk (INCR), a network of over 100 institutional investors with collective assets totaling more than $12 trillion. Ceres also directs Business for Innovative Climate and Energy Policy (BICEP), an advocacy coalition of nearly 30 businesses committed to working with policy makers to pass meaningful energy and climate legislation. For more information, visit http://www.ceres.org or follow on Twitter @CeresNews.

BICEP (Business for Innovative Climate & Energy Policy), a project of Ceres, is an advocacy coalition of businesses committed to working with policymakers to pass meaningful energy and climate legislation enabling a rapid transition to a low-carbon, 21st century economy – an economy that will create new jobs and stimulate economic growth while stabilizing our planet’s fragile climate. For more information and a list of member companies visit: www.ceres.org/bicep. 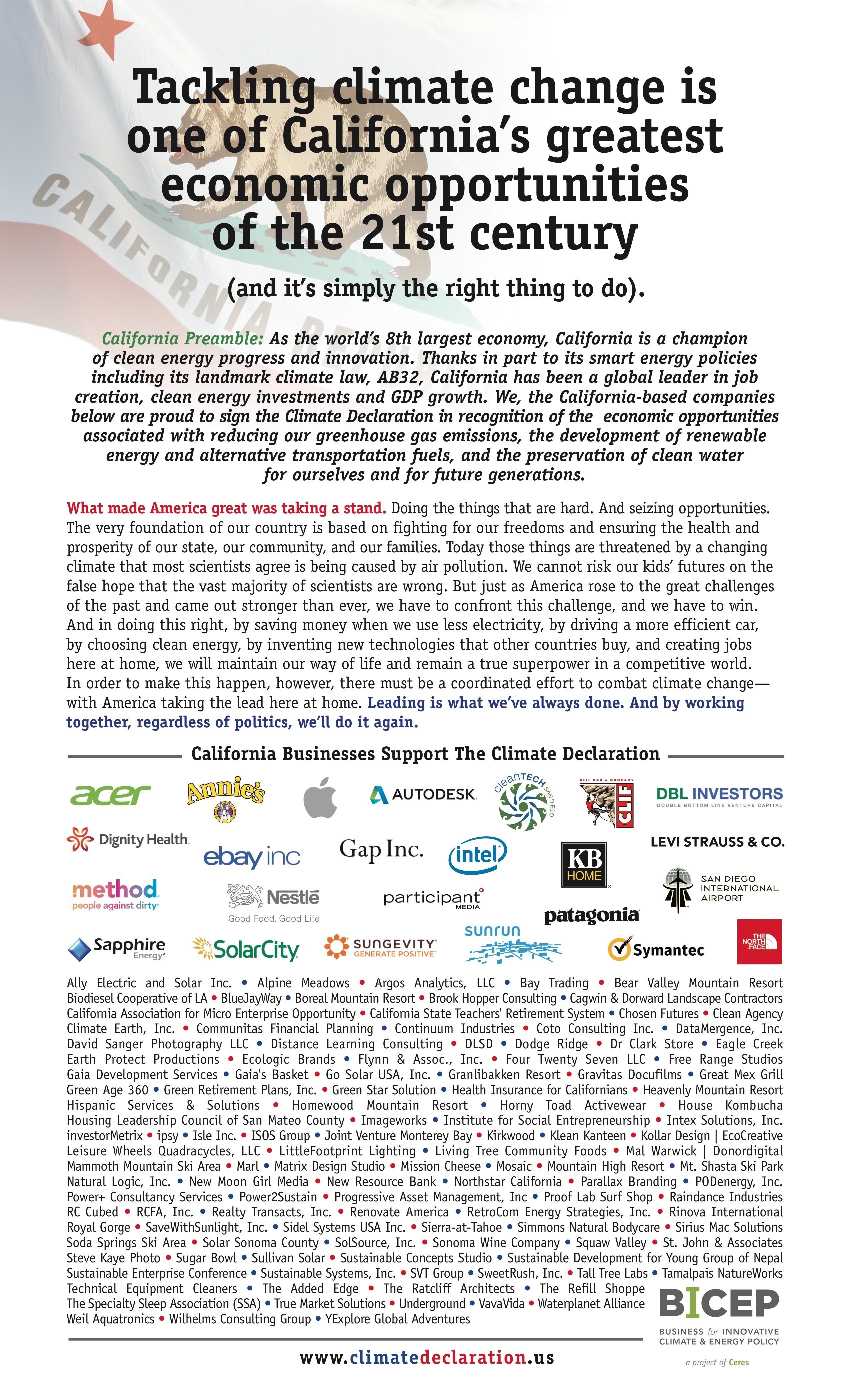