June 30, 2015 /3BL Media/ - Boeing (NYSE: BA) has announced the next phase in ecoDemonstrator 757 testing, including the first flight with U.S.-made "green diesel" and two new environment-related technologies. These developments advance the ecoDemonstrator program's mission to accelerate the testing and use of technologies to improve aviation's environmental performance.

Among more than 15 technologies on the 757, Boeing has begun testing solar and thermal "energy harvesting" to power electronic windows, as a way to reduce wiring, weight, fuel use and carbon emissions. Also, on the 757's flight deck, Boeing has installed a 3D-printed aisle stand made from excess carbon fiber from 787 production to re-purpose this high-value material and reduce airplane weight and factory waste.

"With the ecoDemonstrator, Boeing looks to reduce environmental impact through the airplane's lifecycle, from improving fuel efficiency and cutting carbon emissions to recycling production materials," said Mike Sinnett, vice president, Product Development, Boeing Commercial Airplanes. "In addition to our new technologies, flying the ecoDemonstrator 757 with U.S.-made green diesel is another positive step toward reducing our industry's use of fossil fuel."

In cooperation with NASA, the 757 flew on June 17 from Seattle to NASA's Langley Research Center in Hampton, Va., using a blend of 95 percent petroleum jet fuel and 5 percent sustainable green diesel, a biofuel used in ground transportation. Boeing is working with the aviation industry to approve green diesel for commercial aviation by amending the HEFA biojet specification approved in 2011. This would make aviation biofuel more widely available and price competitive with Jet A including U.S. government incentives. Diamond Green Diesel in Norco, La., produced the 757's green diesel from waste animal fats, inedible corn oil and used cooking oil to reduce lifecycle CO2 emissions by up to 80 percent less than petroleum jet fuel.

This spring, under contract with NASA's Environmentally Responsible Aviation (ERA) Project, the ecoDemonstrator 757 tested active flow control on the vertical tail and bug-phobic coatings on the right wing. With the exception of Boeing proprietary technology, NASA's knowledge gained by collaborating with Boeing on ecoDemonstrator research will be publicly available to benefit the industry.

"We have been thrilled with the data we were able to obtain from our experiments during the ecoDemonstrator 757 flight campaign, and are excited about the impact these NASA-developed technologies will have on the U.S. air transportation industry," said Ed Waggoner, director of NASA's Integrated Aviation Systems Program.

TUI Group is collaborating with Boeing to demonstrate its commitment to innovate for a more sustainable future for air travel and tourism.

"TUI operates Europe's most carbon-efficient airlines and sustainability is key to all products and services that we operate under the TUI brand. We are proud to partner with Boeing and NASA and we are excited to be associated with industry-leading innovations that can further improve our fleet efficiency in the future," said Thomas Ellerbeck, member of the Group Executive Committee of TUI Group. "Sustainable fuels, like green diesel, also have a potential to reduce aviation's carbon emissions significantly and they require the policy and investment framework that will support our investments."

The green diesel flight to Langley was coordinated with the U.S. Federal Aviation Administration, Pratt & Whitney and Honeywell, among others; EPIC Aviation blended the fuel. In December 2014, the ecoDemonstrator 787 made the first-ever flights with green diesel, which is a different fuel product than "biodiesel." 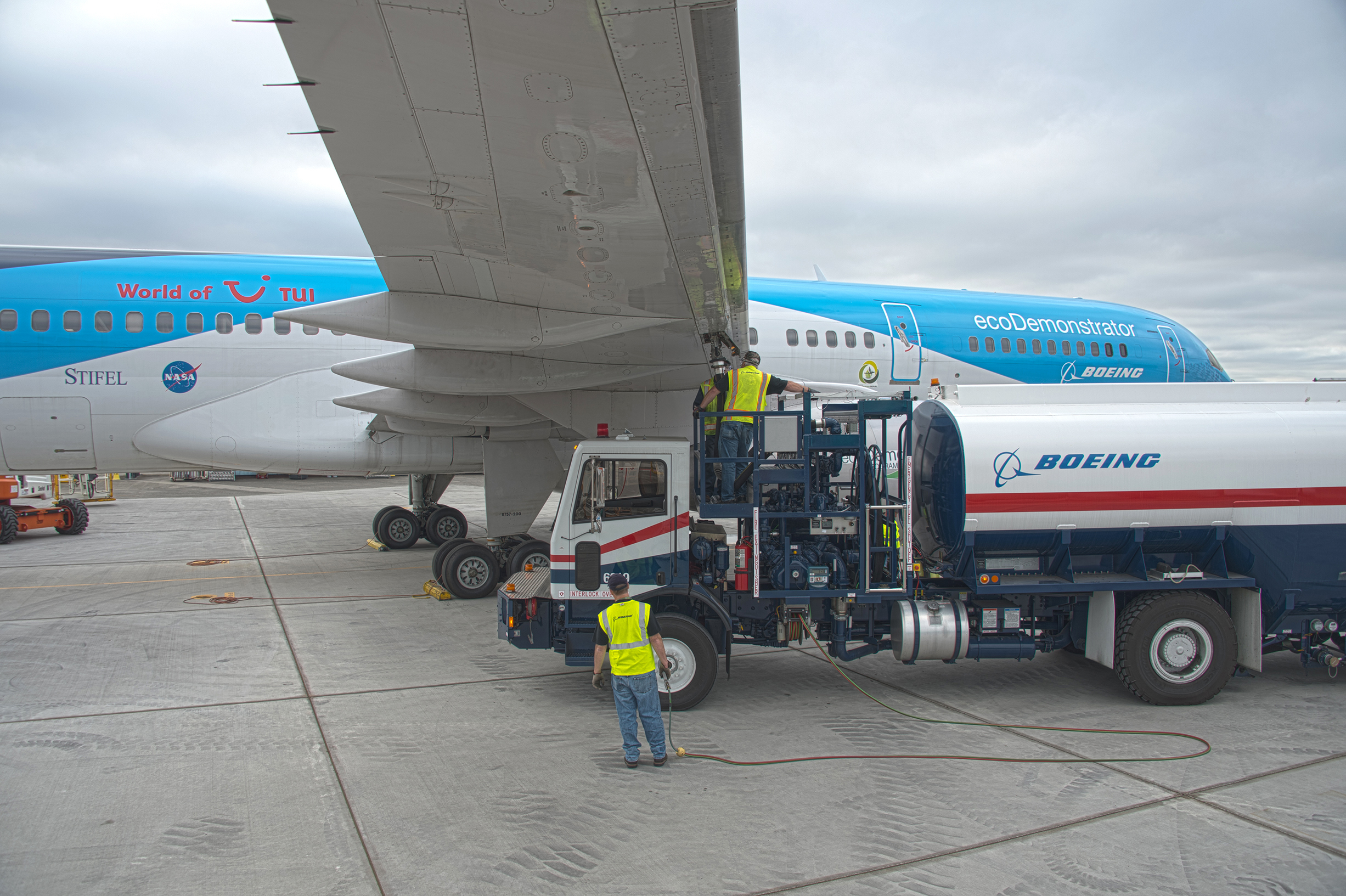