A new analysis released today by Ceres shows that many of the nation’s largest electric utilities and their local subsidiaries are moving toward lower carbon fuel sources and that ambitious state policies and strong corporate demand for renewable energy are key drivers of this trend.

The 2016 Benchmarking Utility Clean Energy analysis ranks the 30 largest electric utility holding companies and their 119 subsidiary companies, which collectively account for about 60 percent of U.S. retail electricity sales. The results show overall advances on renewable energy and energy efficiency in 2014, the latest year for which data is available, with some utilities producing 25 to 35 percent of their electricity from wind, solar and other renewables.

“Renewable energy and energy efficiency, key building blocks of the Clean Power Plan, are increasingly cost-effective options for electric utilities looking to lower their carbon emissions,” said Dan Bakal, director of electric power programs at Ceres, a nonprofit sustainability advocacy organization. “Our analysis shows that the U.S. electric sector is in the midst of an unprecedented shift toward clean energy resources and that state policies are critical for continued progress in achieving national and international climate goals.”

Utilities with the strongest results were typically in states with strong clean energy policies, such as Colorado, Minnesota, Massachusetts and California. The lowest-ranked utilities were mostly in southeast states, such as Alabama and Mississippi, which have weak state policies.

Among the 30 holding companies, Sempra, PG&E, Edison International and Xcel ranked the highest for renewable energy sales, accounting for more than half of the total sales. Renewable resources made up more than 20 percent, and in Sempra’s case, nearly 36 percent, of the companies’ sales in 2014. FPL, American Electric Power, ConEdison and PPL Corp ranked at the bottom, with renewable energy sales accounting for less than two percent of their total retail electricity sales.

Sempra Energy’s renewable energy sales grew by more than 55 percent between 2013 and 2014 alone and Pinnacle West’s grew by nearly 50 percent, while Eversource and DTE Energy demonstrated growth of more than 25 percent.

“Xcel Energy’s positive ranking results from more than a decade of working with our states on clean energy policies,” said Frank Prager, vice president, Policy and Federal Affairs for Xcel Energy. “We continue to focus on our customers’ growing desire for clean, renewable energy while demonstrating that we can successfully integrate these resources reliably and at a reasonable cost. It’s an approach that is significantly reducing emissions and ensuring a more sustainable energy future for our communities.”

“Californians care a lot about clean energy, and we want to be an active partner in making the transition to a low-carbon economy as quickly as possible,” said Melissa Lavinson, chief sustainability officer and vice president of federal affairs for PG&E. “Our showing in the Ceres rankings reflects our commitment to addressing the urgent challenge of climate change, while also helping our customers to use less energy and save money.”

Energy efficiency top performers among the holding companies include Eversource Energy, PG&E, Portland General Electric, National Grid and Pinnacle West. Each achieved annual savings of at least 1.5 percent of their total retail electric sales, while also helping their customers save on their energy bills. Dominion Resources, FPL, Entergy, and Southern Co and OGE Energy were among the weakest performers.

Continued investment in energy efficiency and zero-carbon energy is central to Exelon’s effort to build the next generation energy grid and drive the transition to clean energy,” said Chris Gould, Exelon’s senior vice president, corporate strategy, and chief innovation and sustainability officer. “Exelon continuously works to identify new innovations and smart technologies to give customers greater access to clean energy and tools to help them use energy more efficiently.”

Among the report’s other key findings:

"Seeing the leaps the renewable energy leaders have made in just two years has been amazing,” said Ron Pernick, Managing Director of Clean Edge, a clean-tech research and advisory firm, which co-authored the report with Ceres. "Governments, corporations, and individual customers continue to demand clean, efficient energy, and some utilities are answering that call.”

About Ceres
Ceres is a non-profit organization that is mobilizing many of the world’s largest investors and companies to take stronger action on climate change, water scarcity and other global sustainability challenges. Ceres directs the Investor Network on Climate Risk, a group of 120 institutional investors managing about $14 trillion assets focused on the business risks and opportunities of climate change. Ceres also engages with 100-plus companies, many of them Fortune 500 firms, committed to sustainable business practices and the urgency for strong climate and clean energy policies. For more information, visit www.ceres.org or follow on Twitter @CeresNews.

About Clean Edge
Clean Edge, Inc., founded in 2000, is the world’s first research and advisory firm devoted to the clean-tech sector. The company benchmarks and tracks the clean-energy economy by delivering stock indexes, utility and consumer surveys, and regional (state and metro) leadership tracking. These services provide companies, investors, NGOs, and governments with timely research, trending analysis, and actionable insights. Managing director Ron Pernick and senior editor Clint Wilder are co-authors of the widely acclaimed business books The Clean Tech Revolution (HarperCollins, 2007) and Clean Tech Nation (HarperCollins, 2012). To keep abreast of the latest clean-energy trends, or for more information on the company, visit www.cleanedge.com and follow us on Twitter @CleanEdgeInc. 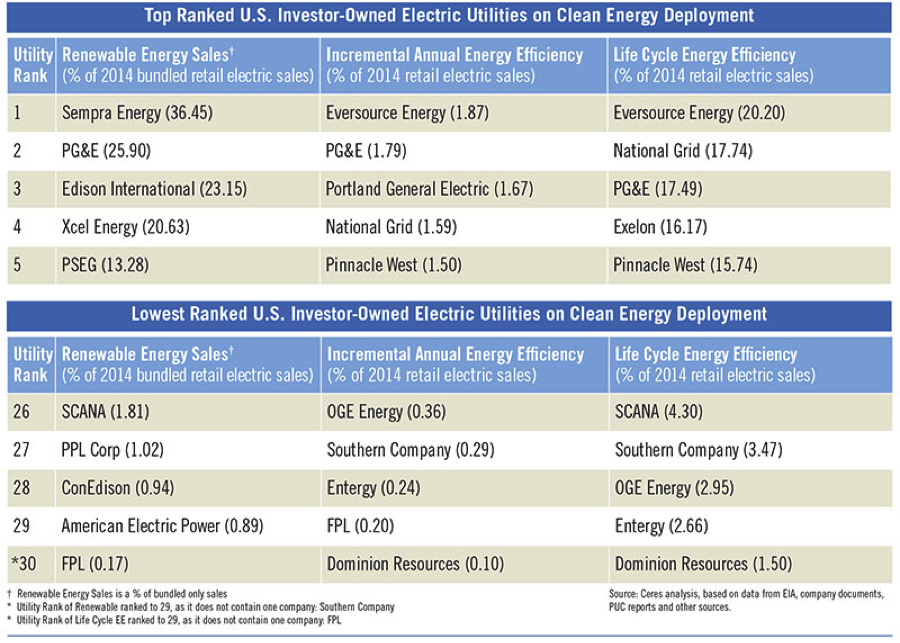 In Historic Votes, Shareholders Demand Strong Climate Action From the U.S. Oil and Gas Industry
May 14, 2021 9:20 AM ET
Major Investors Demand Ambitious Methane Regulations in the U.S.
May 13, 2021 10:30 AM ET
Major U.S. Businesses and Investors Urge Biden Administration and Congress to Support an Infrastructure Package to Build a Sustainable Future
May 12, 2021 11:05 AM ET
Investors and Business Leaders Urge Passage of California Climate Risk Disclosure Legislation
May 11, 2021 1:55 PM ET
Fast Food Giants Ramp up Climate Commitments Under Pressure From Investors in 'Breakthrough Year'
Apr 30, 2021 11:05 AM ET