NEW YORK, NY, June 2, 2015 /3BL Media/ - CECP, in association with The Conference Board, found in their annual Giving in Numbers survey that companies utilized their core business to invest in communities, with 56 percent of companies increasing total giving from 2012 to 2014. While there were increases for a majority of companies on an individual basis, giving rates largely stabilized across the sector in the same period. This stabilization shows that the business case for societal engagement is strong, with companies increasingly seeing community investment as essential to their operations.

In particular, growth in five key indicators between 2012 and 2014 illustrate the expanding application of corporate skills and resources to solving societal challenges:

“These five indicators confirm that companies are adding to traditional societal investment programs to become more strategic and innovative, and infuse purpose throughout the entire company,” stated Daryl Brewster, CEO, CECP. “To these companies, purpose means making societal improvement an essential measure of business performance, and we call on companies to invest even more in this pursuit.”

“This year’s data show a corporate giving landscape that continues to evolve as it increasingly becomes a strategic imperative at companies,” said Alex Parkinson, Researcher, The Conference Board. “Companies developing sophisticated corporate giving programs that utilize the full breadth of resources to expand their social impact are positioning themselves to deliver long-term value to both their shareholders and society. They are leading the charge in shifting from a short-term, financials-driven perspective to a more comprehensive long-term value proposition.”

CECP, a coalition of 150 CEOs who are a force for good, conducts the annual Giving in Numbers Survey in association with The Conference Board. A record 271 companies participated in the 2015 survey.

“No longer are we simply looking at corporate societal investments going up or down as the sole indicator of how well companies respond to community needs,” stated Carmen Perez, Director, Evaluation and Data Insights, CECP. “We now look at the quality of how the company applies the full scope and scale of the skills and resources corporations can uniquely leverage to solve societal challenges. While the field is innovating beyond current measures, CECP is working directly with our companies through a Next Generation Measurement project to build evaluation and benchmarking, which will truly show how things are changing.”

2014 Giving in Numbers data was released in front of an audience of 250 corporate societal engagement professionals at the CECP Summit.

Custom analysis of the data is available to CECP-affiliated companies at no additional cost; these companies can access data through CECP’s secure online portal or by calling CECP. 2014 data is now available online.

Giving in Numbers Survey respondents that are also members of The Conference Board Contributions Councils I and II, and the Global Social Investing Council, have access to proprietary benchmarking data drawn from the member companies taking part in the survey. Members can access this data by contacting The Conference Board (mailto:alex.parkinson@conference-board.org).

CECP is grateful to Newman's Own Foundation, Travelers, and PricewaterhouseCoopers LLP for their support in making Giving in Numbers possible.

Note to Editors: Carmen Perez is available for comment and a more in depth look at the community investment data collected from 271 of the world’s largest companies.

CECP is a coalition of CEOs united in the belief that societal improvement is an essential measure of business performance. Founded in 1999 by Paul Newman and other business leaders, CECP has grown to a movement of 150 CEOs of the world’s largest companies across all industries. Revenues of engaged companies sum to $7 trillion annually. A nonprofit organization, CECP offers participating companies one-on-one consultation, networking events, exclusive data, media support and case studies on corporate engagement. For more information, visit http://cecp.co.

ABOUT THE CONFERENCE BOARD

The Conference Board is a global, independent business membership and research association working in the public interest. Our mission is unique: To provide the world’s leading organizations with the practical knowledge they need to improve their performance and better serve society. The Conference Board is a non-advocacy, not-for-profit entity holding 501 (c) (3) tax-exempt status in the United States. www.conference-board.org 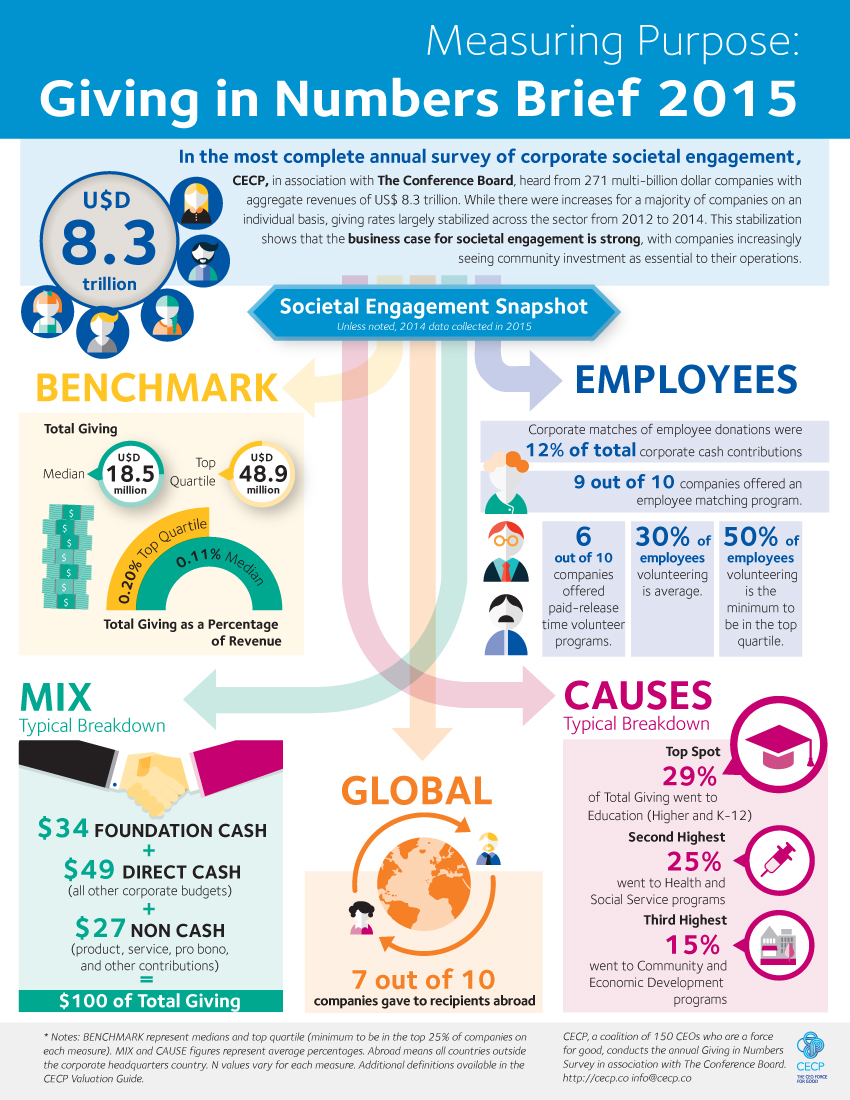