Helping Communities in Need on Cruises Around the World

Jun 11, 2015 10:30 AM ET
Tweet This:
.@HALcruises helps communities in need on cruises around the world #carnivalcorp http://3bl.me/zf9hd5
Press Release

June 11, 2015 /3BL Media/ - Holland America Line ships sail to all seven continents and explore the world’s oceans. During our global adventures we visit hundreds of ports and our guests are warmly welcomed into those communities. So it is with great pride that whenever necessary we help those communities when in need.

Holland America Line recently participated in some great acts of giving around the world, providing supplies and monetary relief to communities in need.

Aid Delivered to the Island of Vanuatu
In April during a scheduled call at Port Villa, Vanuatu, in the South Pacific, Oosterdam delivered much-needed supplies to the island, which was ravaged by Cyclone Pam in March.

Not only did Oosterdam collect donations and supplies from guests and crew, it also carried essential goods on behalf of Save the Pacific Foundation. The organization had supplies to be delivered and needed a way to get them to Vanuatu from Sydney, so they coordinated the relief effort with Carnival Australia and Holland America Line. Oosterdam was making a scheduled call — the only ship calling at Vanuatu departing from Sydney in the next two months — and agreed to carry the supplies to the island.

Included in the eight pallets from Save the Pacific Foundation were medical supplies, clothing, bed linens, shelter tarps and tents, gumboots, work tools for rebuilding and food such as whole milk powder, rice and cans of basic items.

The ship also collected monetary donations and goods from guests and crew who wanted to help, and delivered additional pallets that included canned goods, insect repellent and personal hygiene items.

Earthquake Relief Efforts in Nepal
Last month Carnival Corporation teamed with several of its global cruise brands to pledge $200,000 to relief efforts in Nepal in the wake of April’s devastating earthquake. Carnival Corporation worked through Mercy Corps, the Disaster Emergency Committee and Save the Children to support on the ground teams distributing emergency supplies and aiding rebuilding efforts targeting the most affected families in Kathmandu and surrounding areas.

Carnival Corporation’s support will help the three organizations provide access to shelter supplies, food, water and hygiene supplies, support the operations of the Nepal Red Cross and ultimately assist families in rebuilding their lives after initial life-saving needs are met.

P & O Cruises UK and Cunard Line provided a significant portion of the donation out of the companies’ offices in the United Kingdom. Likewise, Carnival Cruise Line, Seabourn and Holland America Line combined to donate the majority of the funds in North America in coordination with Carnival Foundation, the company’s philanthropic organization.

Amsterdam Raises Money for Children in Myanmar
During Amsterdam’s 2015 Grand World Voyage, guests participated in a silent auction to raise money for the Smile Education and Development Foundation (SEDF) in Myanmar. SEDF benefits many organizations to help children at risk.

Organized by Culinary Arts Center Host Samantha Seyfert, the silent auction featured donated items from all departments, including a Grand World Voyage navigational map hand-signed by Captain Jonathan Mercer and the ship’s officers. The auction also featured dozens of hand-knit items donated by guests participating in the Sit & Knit gatherings, watercolor paintings donated by guests in the watercolor class, and items from the arts and crafts class.

March 10 Amsterdam called at Yangon (formerly Rangoon) for two nights and SEDF representatives came on board for lunch and a tour of the ship. Samantha presented SEDF Director Virginia Henderson with $7,000 raised from the auction. Children at the Rattana Metta Foundation performed during one of SEDF’s workshops while ms Amsterdam was still alongside March 11.

Statendam Makes a Big Donation to the Kids of Fanning Island
On April 25, ms Statendam called at remote Fanning Island in the South Pacific Republic of Kiribati. Crew members delivered 45 boxes of school supplies, clothes and sporting equipment to the Fanning Island school committee. Over the past 18 months, Statendam has visited the island several times to bring a total of 200 boxes of much-needed supplies donated by guests and crew.

As the needs arise, Holland America Line will continue to help our global friends whenever possible. 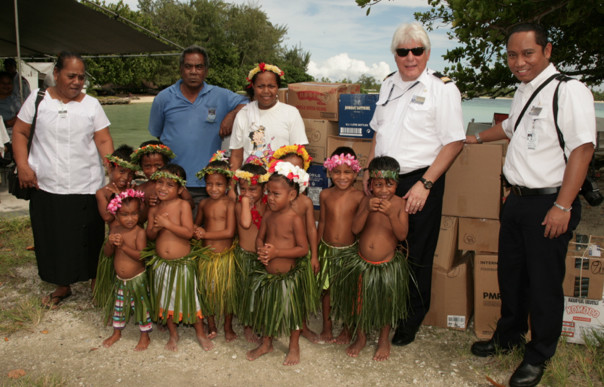 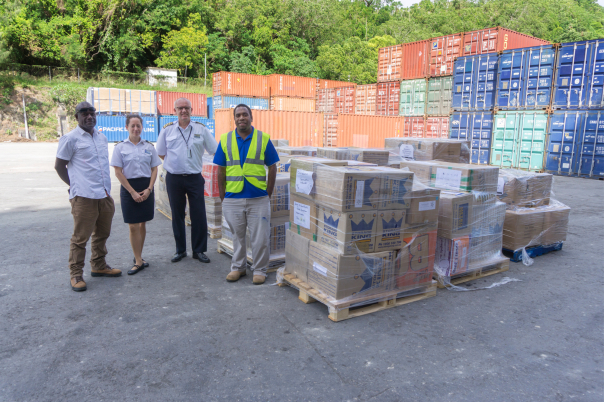 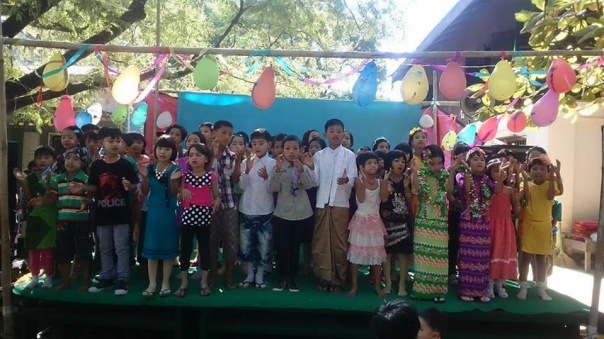 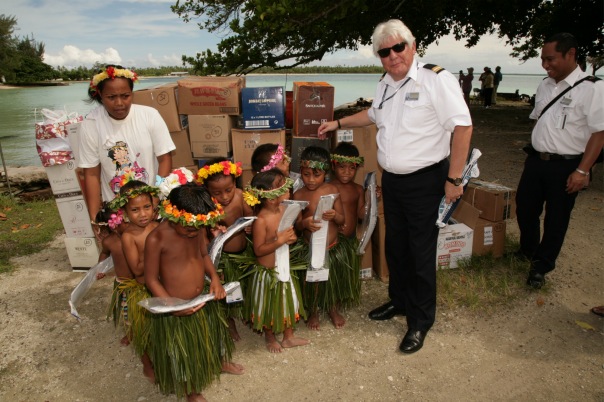