The project goal was to replace the existing 40-foot high bay lighting system in the stamping plant with one that provided the same brightness and illumination yet costs less money, consumes less energy and requires less maintenance.

The plant hit all three goals:

The new lights are expected to operate maintenance-free for more than 150,000 hours.

“We can wirelessly control our lights without having to spend a lot of time and resources installing a separate control system,” said Chuck Simpson, Lordstown site utilities manager.

The fixtures are equipped with a fully integrated and built-in wireless control system, which allows operators to schedule lights in certain parts of the plant at certain intensities to follow production schedules, while dimming fixtures during breaks and between shifts. The plant removed fluorescent night lights and used selected high bay fixtures during non-production hours.

“We saw this project as a great opportunity not only to enhance lighting in our facility and realize significant annual energy and maintenance savings, but also to do our part to reduce our carbon footprint as a company and help General Motors continue to be a leader in innovative, green technology solutions,” said Steve Rhoades, Lordstown Complex manufacturing engineering director.

Worldwide, GM is dedicated to energy efficiency and is working toward a goal to reduce energy intensity from its facilities 20 percent by 2020. The company is the No. 1 automotive user of solar power in the United States and received an EPA ENERGY STAR® Partner of the Year - Sustained Excellence award, the organization’s highest level of recognition for corporate energy management.

“With 6 million square feet of buildings and lighting, there is a tremendous opportunity to become the benchmark in green energy solutions, as well as save a lot of money,” Rhoades said. 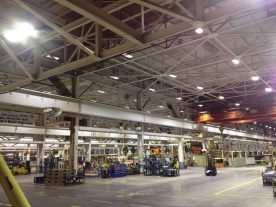