Rehabilitated reef off the coast of Indonesia aims to replenish marine life and to provide food security for local population
Jun 8, 2015 11:10 AM ET
Press Release

Sulawesi, Indonesia, June 8, 2014 /3BL Media/ – To coincide with World Ocean Day on June 8th 2015, Mars, Incorporated will be embarking on the next phase of a coral reef restoration project on one of the largest single coral reef rehabilitation projects anywhere in the world.

Since 2007, Mars Symbioscience has been working to restore the coral reef infrastructure on the island of Pulau Badi in Indonesia, at the heart of the Coral Triangle. This week, over 1200 square meters of new coral reef will be installed to expand the already blossoming rejuvenated reef - which stretches almost 1km along the island reef crest. Following this work, the total area of new coral installed will be more than 8000 square meters - effectively rehabilitating over 2 hectares of coral habitat.

The rebuilding of the reef and creation of a marine protected area is driving significant increases in fish stocks, providing food and commercial opportunities for islanders for generations to come. Prior to the rehabilitation, the original coral reef had been largely destroyed by years of destructive fishing practices, causing a severe shortage of fish as well as erosion of the island itself.

As well as repairing the marine eco-system and providing job opportunities within the community, the project aims to provide a blueprint for best practice coral rejuvenation, which could help transform sustainable fishing practices.

Noel Janetski, Director of Marine Sustainability said: “Since we started installing the new reef in 2012, we have seen very significant growth in the coral cover and a dramatic increase in marine life. Already, the reef has attracted a number of turtles as well as significantly increasing the number of fish. Our hope is that the model that we develop can be implemented in the many thousands of small islands throughout the Coral Triangle creating a permanent change in the way that small island coral reef systems are managed and maintained in the future.”

The installation of the coral will be carried out over four days starting on June 9th by 10 Mars Associates taking part in the Mars Ambassador Program – a volunteer initiative, which sees Associates from across the globe come together with local workers and interns to get involved with Mars sustainability projects first hand. As part of the project, local fishing communities will receive training in how to both nurture and improve their livelihoods through the reef in a sustainable way.

“We are working together with Mars to establish the legal framework for sustainable management of the new coral reef infrastructure over the long term, “said Muhammad Natsir Sulaiman, Head of Fish and Marine Affair Department of Pangkep, South Sulawesi. “It is critical to sustainably manage the rehabilitated coral reef and the fish that inhabit it, for food and the livelihoods of our people. Mars has been a valuable partner to the people of Sulawesi and we will work hard to ensure that the new coral reef flourishes.”

The project runs parallel to another Mars, Incorporated initiative related to marine ecosystems: the company's wider commitment to source all its fish from sustainable sources by 2020. More information is available in the Principles in Action Summary.

About Mars, Incorporated
Mars, Incorporated is a private, family-owned business with more than a century of history and some of the best-loved brands in the world including M&M’S®, PEDIGREE®, DOUBLEMINT® and UNCLE BEN’S®. Headquartered in McLean, VA, Mars has more than $33 billion in sales from six diverse business segments: Petcare, Chocolate, Wrigley, Food, Drinks and Symbioscience. More than 75,000 Associates across 73 countries are united by the company’s Five Principles: Quality, Efficiency, Responsibility, Mutuality and Freedom and strive every day to create relationships with stakeholders that deliver growth we are proud of as a company. 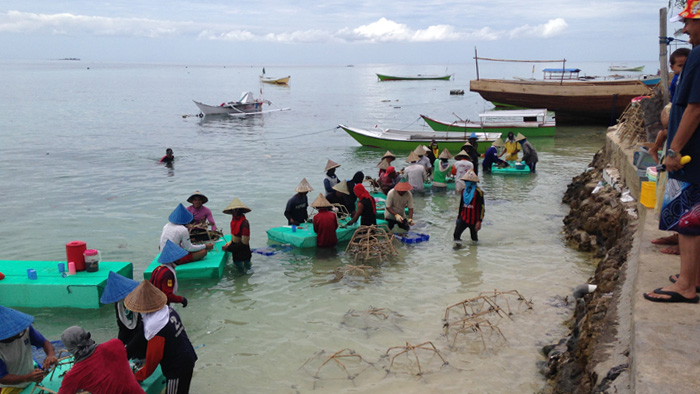