GREENVILLE, S.C., May 11, 2015 /3BL Media/ – Michelin Development--a subsidiary of Michelin North America, Inc. that provides business loans to upstart businesses in many of the communities the tire company operates--today approved another loan to a small but growing South Carolina transportation company that now needs one more driver and truck to keep ahead of demand.

Michelin launched the Michelin Development program in North America in 2006 and with the addition of this newest loan the company celebrates a milestone: 100 loans awarded to small businesses and start-ups with nearly 1,500 jobs created in the United States and Canada. The company has contributed nearly $9 million in funding.

Michelin Development contributes to the economic regeneration and growth of the communities where Michelin has facilities by providing low-interest loans to small businesses or start-ups. In addition to financial support, the program also provides business expertise from Michelin’s network of professionals.  The program originally began in France and successfully spread to North America in 2006.

Michelin Development first began in Ontario, Canada, as a way to provide abiding support and involvement in the region after the company announced it would no longer produce tires in the Waterloo area. The initial program was active for three years, during which time more than $3 million was granted for 20 loans that led to the creation of more than 530 jobs.

“Michelin has a long-standing commitment to improve the communities where we make tires and where our employees live,” said John Tully president of Michelin Development. “This program allows us to champion the entrepreneurs and innovators in these communities as they build their businesses and create jobs.

In 2009, when the United States was experiencing difficult economic circumstances, Michelin launched the Michelin Development Upstate program to provide support to the area that is home to the company’s North American headquarters and several manufacturing facilities. In six years the program has awarded 51 loans that have created approximately 500 jobs. The Upstate program focuses on socially or economically disadvantaged businesses in the 10-county region.

The company also launched the Michelin Development East Alabama program in 2009 after a decision was made to reduce production at a tire facility there. In two years, Michelin loaned nearly $2 million to 15 small businesses. These businesses ultimately generated 450 new jobs in the area.

The new business receiving funding is one of the first benefactors of the Michelin Development Upstate program, DW&K Services, a transportation company. The company first became a client in 2010 and will use this new loan to purchase a new truck and add a new driver.

Most recently in 2014, Michelin launched the Nova Scotia program to support the area in Pictou County to correspond to the reduction of tire production at one facility there. In one year, Michelin has loaned nearly $1 million to 15 small businesses.  The program is growing rapidly, with new loans getting approval weekly. These businesses are well underway to creating new job opportunities for residents in that region.

Those interested in learning whether Michelin Development can support their business goals can find out more and apply online at www.michelindevelopment.com. 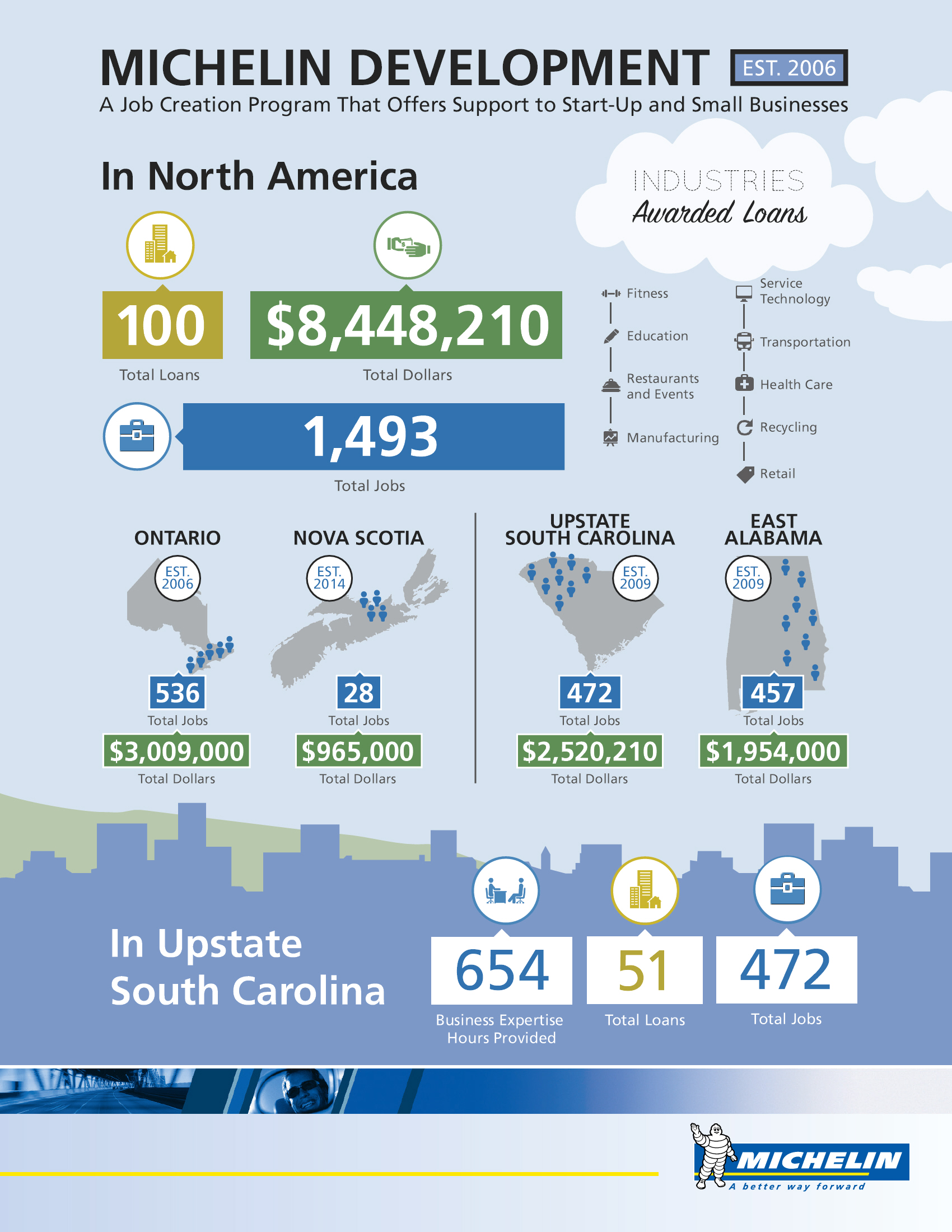