The company plans to install an innovative battery storage project at its solar generation facility in Everett in addition to the one it already has in place in Shirley, making it the first investor-owned utility in the region to add energy storage to its renewables program. The announcement comes on the heels of a report released Friday by the Baker-Polito Administration that examines the benefits of adding energy storage to the state’s energy portfolio. The administration anticipates that by implementing projects such as the ones like National Grid will, there is potential to save Massachusetts taxpayers hundreds of millions of dollars, lessen the impacts of peak demand on the state’s energy infrastructure, and reduce carbon emissions by better integrating renewable resources into Massachusetts’ energy infrastructure.

“We are thrilled to continue our leadership role in developing this vital, clean energy source and expand concepts from our prior work in solar generation, especially as we explore new technologies,” said Carlos Nouel, vice president, New Energy Solutions at National Grid.  “Advancing solar and other renewable energy sources is in our DNA at National Grid. It’s an integral part of meeting customers’ needs in the 21st century.”  He added, “As we work toward modernizing our system, we want our electricity distribution system to be an innovation playground that ultimately benefits our customers.”

The utility expects to learn whether the technology will harness solar power that can be used even when the sun isn’t shining to ease peak demand times on the electric system.

Additionally, using advanced inverter technology will help evenly distribute the amount of solar energy flowing into the electric system. In keeping with its commitment to take its customers into the future with a diverse energy portfolio, National Grid is also constructing a battery storage system at a wind turbine located in Worcester.

Building on the company’s two previous programs to develop 21 MW (Phase 1 and 2) of solar capacity, National Grid plans to add 14 MW across the company’s service area in Mass.  Phase 3 complements, extends and expands the research already in progress under Phase 1. If approved by the DPU, under the new proposal, the company will work with third parties to locate and build the solar arrays and associated new technologies by December 2017, helping to meet the Commonwealth’s clean energy goals of attaining 20 percent of the state’s electricity through renewables by 2020.

Unlike traditional solar installations, which seek to maximize energy production, National Grid is seeking proposals to construct solar generation facilities with advanced inverters in strategic locations and outfit them with emerging or underutilized technologies. Under this next phase of the project, National Grid plans to add sun tracking systems, solar canopies, and additional energy storage to the installations. The company hopes to test whether these new tools will aid electricity distribution system resiliency and alleviate system constraints during times of peak electricity demand.

Under the state’s new solar legislation, enacted in April of this year, electric utilities are allowed to construct, own and operate up to 35 MW of solar generation.

National Grid’s approach to planning and operating energy infrastructure in the Northeast, which the company calls Connect21, aligns with the Commonwealth’s goal to grow the solar market and reduce greenhouse gas emissions.  In addition to developing its own solar installations, the company has connected more than 520 MW of customer-owned solar in the state.  National Grid empowers customers and communities by linking customer needs and public policy goals with technology and market solutions, thus driving energy productivity, a cleaner energy environment and more robust local economies. The company continues to advocate for a balanced portfolio of energy resources, including large-scale affordable renewables, increased natural gas pipeline capacity, electric transmission capacity and enhanced energy efficiency programs, as the key to securing New England’s long-term energy future and providing our residential and business customers with the energy stability they need.

National Grid (LSE: NG; NYSE: NGG) is an electricity and natural gas delivery company that connects nearly 7 million customers to vital energy sources through its networks in New York, Massachusetts and Rhode Island. It is the largest distributor of natural gas in the Northeast. National Grid also operates the systems that deliver gas and electricity across Great Britain.

Through its U.S. Connect21 strategy, National Grid is transforming its electricity and natural gas networks to support the 21st century digital economy with smarter, cleaner, and more resilient energy solutions. Connect21 is vital to our communities' long-term economic and environmental health and aligns with regulatory initiatives in New York (REV: Reforming the Energy Vision) and Massachusetts (Grid Modernization.) 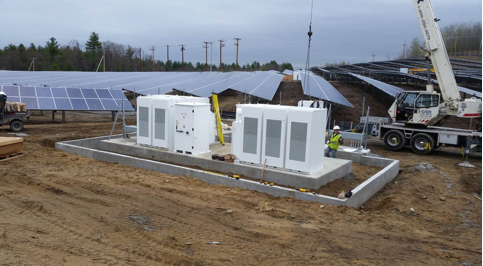