Premiere in the Port of Hamburg: AIDAprima and AIDAsol Supplied with Clean Electricity from LNG in Hamburg on May 14

August 12, 2016 /3BL Media/ - The port of Hamburg celebrated a premiere relating to LNG supply in May. On Saturday, May 14, AIDAprima and AIDAsol became the first two AIDA ships to be simultaneously supplied with and/or powered with energy produced from LNG (liquefied natural gas) while berthed in the port of Hamburg. AIDAprima´s Dual Fuel Motors are supplied directly from an LNG truck at the cruise terminal in Steinwerder. AIDAsol is supplied in the HafenCity via the LNG hybrid barge, “Hummel”, with power that comes from low-emission LNG. This is an important contribution to environmental protection, because compared to the use of conventional marine diesel with 0.1 percent sulfur content emissions and particle discharge will be significantly reduced by using LNG. The emission of sulfur oxide and soot particles will be completely prevented. Nitrogen oxide emissions will be reduced by up to 80 percent and carbon dioxide emissions by 20 percent.

Following AIDAprima’s first successful LNG-supply trial run in Hamburg on May 7, 2016, the new flagship of the cruise company AIDA Cruises also completed its first LNG operation at the ports of Southampton, Le Havre and Zeebrügge. This means that AIDAprima can already be supplied with low-emission power at four ports on its route.

AIDAprima is the world's first cruise ship which can be operated in an environmentally friendly way in port with liquefied natural gas (LNG). With the next generation of ships that will be put into service in 2019/2020, AIDA Cruises will go one step further. Under the concept of "Green Cruising" they will be operated with 100 percent low-emission LNG. 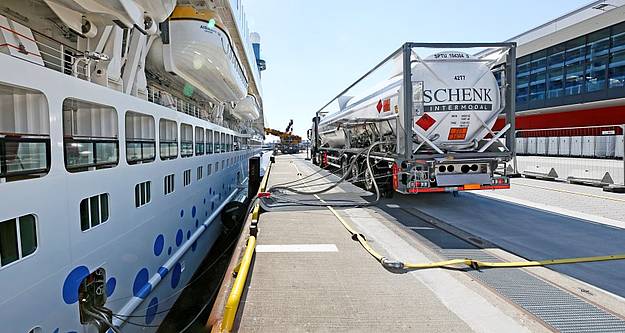