Tim McGraw, Chase and the U.S. Navy Bring Free Concert to Jacksonville for Military Members and Their Families To Celebrate Veterans Day

Nashville, TN, Oct. 14, 2013 /3BL Media/ - Country superstar Tim McGraw is set to perform a special concert in Jacksonville, FL on Sunday, Nov. 10 for military members and their families at U.S. Naval Station Mayport to celebrate Veterans Day.  "Chase Presents Live From The HomeFront: Tim McGraw" will also be broadcast live on the Pentagon Channel and online at www.timmcgraw.com and http://www.youtube.com/user/timmcgraw starting at 8:45 PM EST, bringing the concert to fans worldwide.

"It's easy for me to show up and play music to honor the men and women who have the really tough jobs," said McGraw.  "To me, it's just one small thing I can do to help show how much we appreciate what they put on the line and what these families sacrifice every single day. Since we started this program 18 months ago, I have had the privilege of meeting many servicemembers and their families and have heard many inspiring stories.  It's something I'm proud to do and want to take it as far as we can!"

“It’s an honor for us to partner with Tim McGraw and the Navy to thank our servicemen and women, past and present, and their families,” said Mel Martinez, chairman of JPMorgan Chase in the Southeast U.S. “We are happy to be able to give back through this concert as well as through our firm’s military programs to a community that has given so much to us.”

Naval Station Mayport is one of three Navy bases in the Jacksonville, FL area and home to nearly 5,000 uniformed servicemembers, their families and 2,000 Department of Defense civilian employees. There are more than 1.5 million veterans who call Florida their home.

“On the eve of Veteran’s Day, this concert is a gift and tribute to the brave men and women of our military who have served their country. This is an opportunity to say thank you to our servicemembers and their families who wear the cloth of this great nation and to those who have gone before us defending freedom and democracy around the world,” said Capt. Wes McCall, Naval Station Mayport Commanding Officer. “I extend my heart-felt thanks to Chase and Tim McGraw for choosing Naval Station Mayport as the location to share their time and talents in honor of America’s fighting forces.”

Since McGraw partnered with Chase and Operation Homefront over a year ago to create the HomeFront program, they have awarded more than 70 mortgage-free homes to wounded warriors and military members in need and will give another to a deserving family on Nov. 10.  With one million servicemembers projected to transition out of the military by 2016, the HomeFront program helps returning veterans successfully transition back to civilian life and build a solid foundation for the future. Chase has provided more than 600 mortgage-free homes to military families through its nonprofit partners as part of an initiative to award 1,000 homes to deserving veterans and their families.

Awarding homes is one part of a broader program JPMorgan Chase launched in 2011 aimed at positioning transitioning servicemembers, veterans and their families for successful and happy post-service lives. The bank is a founding member of the 100,000 Jobs Mission, a coalition of 120 leading companies working together to collectively hire 100,000 veterans by 2020. In less than three years, the coalition members have already hired more than 77,000 U.S. military veterans.

McGraw's latest single, "Southern Girl," off his current album TWO LANES OF FREEDOM is quickly climbing up the Top 10 on the radio charts and comes on the heels of his 34th career No. one hit.  He recently received three nominations for November’s CMA Awards for his PLATINUM certified No. one single “Highway Don’t Care,” an all-star collaboration with Taylor Swift, featuring Keith Urban on guitar.  Over his career, McGraw has sold over 40 million albums, won three GRAMMY’s, 15 ACM Awards, 12 CMA Awards and 10 AMA’s, while simultaneously maintaining a parallel career as a successful actor in such films as the Oscar nominated The Blind Side, Country Strong, Friday Night Lights and the upcoming Disney production, Tomorrowland starring George Clooney and directed by Brad Bird, scheduled for release in theaters late 2014.

About Chase:
Chase is the U.S. consumer and commercial banking business of JPMorgan Chase & Co. (NYSE:JPM), a leading global financial services firm with assets of $2.4 trillion and operations in more than 60 countries. Chase serves more than 52 million consumers and small businesses through more than 5,600 bank branches, 19,000 ATMs, credit cards, mortgage offices, and online and mobile banking as well as through relationships with auto dealerships. More information about Chase is available at www.chase.com. Information about Chase’s programs for military members, veterans and their families can be found at www.ChaseMilitary.com. 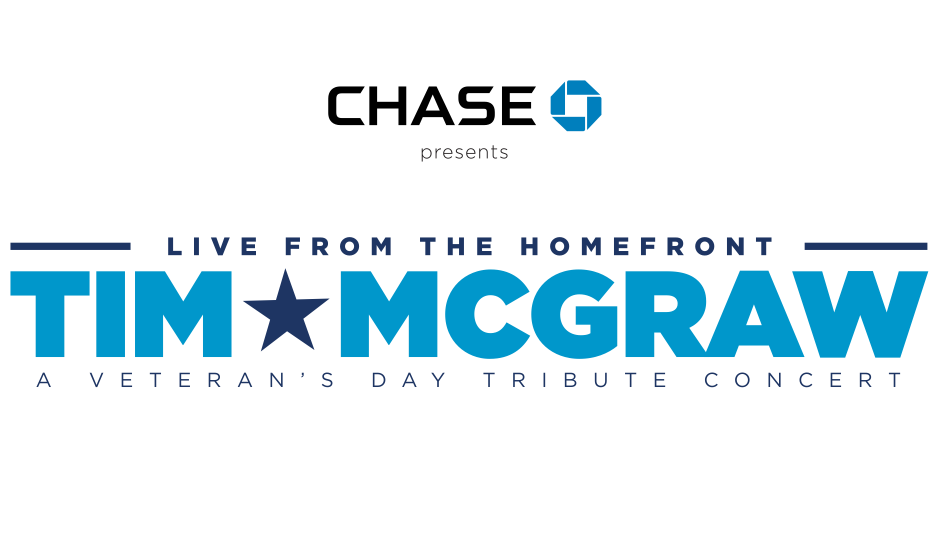