Caesars Entertainment touts its commitment to environmental stewardship, but the company’s latest Corporate Citizenship Report demonstrates that it is more than just a mere boast.

The company achieved a 12.6 percent reduction in greenhouse gas (GHG) emissions in 2013, surpassing its goal of a 10 percent reduction. Caesars surpassed other goals including its goal for water reduction. The hotel chain reduced water use by 18 percent per air conditioned 1,000 square feet in 2013. The goal was to reduce water use by 10 percent by 2015 and 15 percent by 2020.

Environmental stewardship is a long-term strategy Caesars developed about six years ago, Gwen Migita, Vice President of Corporate Citizenship and Sustainability, told me. The company is currently in the next stage of its five-year strategy. “Environmental stewardship was a long-term strategy we really developed about six years ago,” Migita said. “From the top down, our CEO has made a commitment to sponsor and support our sustainability strategy.”

Caesars diverted 35 percent of its waste from landfill in 2013, beating its goal of a 25 percent diversion by 2014. That puts it well on its way to meeting a 50 percent target by 2020. At Las Vegas properties it has already achieved “around a 50 percent” waste diversion rate, Migata said. “Six-seven years ago some of those properties may have been in a single digits. So, it’s been a pretty staggering shift in terms of waste diversion,” Migita said. 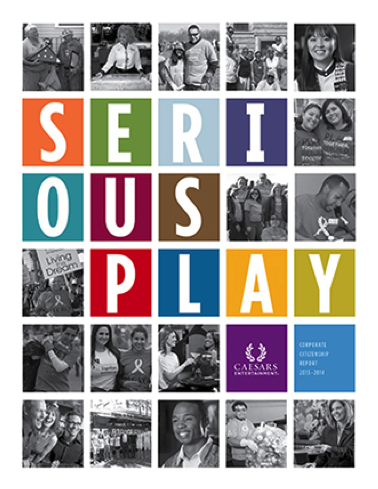