Throughout the month of September, the restaurant will be educating customers about the importance of helping hungry families in Michigan.
Sep 19, 2013 9:00 AM ET
Tweet This:
1 in 6 people in the US go to bed hungry every night http://3bl.me/4hc2zt @PaneraBread's work on #HungerActionMonth by @DearbornPatch
Article
Dearborn Patch

If you've been to Panera Cares lately, chances are you’ve see a lot of orange.

No, it's not for Halloween.

Sept. 1 marked the start of national Hunger Action Month, when the Feeding America nationwide network of food banks urges action in local communities.Orange is the official color of Hunger Action Month, and Panera Cares will be encouraging their employees to wear orange and educating customers about the importance of helping out the community.

According to Feeding America, one in six people in the United States go to bed hungry every night.

"Many people believe that the problems associated with hunger are confined to small pockets of society or certain neighborhoods, but the reality is much different," said Colleen Kincaid, general manager of Panera Cares.

"Hunger could be a college student working, but struggling to pay for a car and an apartment making minimum wage. It could also be a family that recently went from two incomes to one," Kincaid said. "These are often hard-working adults, children and seniors who simply cannot make ends meet and are forced to go without food for several meals."

More than one in eight households in Michigan struggled with hunger on average from 2010 to 2012, according to new data released today by the U.S. Department of Agriculture Economic Research Service in its annual report on food insecurity. Nationally, more than 48.9 million people lived in households that were food insecure in 2012 – 14.1 percent of all adults and 21.6 percent of all children lived in food insecure households.

Panera Cares provides meals for the Metro Detroit area through a "pay what you can system." About 65 percent of customers pay the suggested amount for their meals, around 20 percent give more, and around 15 percent pitch in less or nothing at all. No questions are asked and everyone is treated equally.

The restaurant will celebrate its third anniversary in November, and has been a welcomed addition to the downtown business district.

"We are literally helping out our neighbors because a lot of our food insecure customers are from Dearborn," Kincaid said.

In addition to the honor system, Panera Cares also participates in a weekend program by donating bread to "Blessings in a Backpack" at Dearborn Public Schools.

"Blessings in a Backpack" provides low-income students at DuVall and Snow elementary schools with food for the weekend such as oatmeal packets, soup, canned pasta, granola bars, and Panera bread.

The restaurant also hosts regular food and fundraiser drives for Gleaner's Food Bank and other nonprofits throughout Wayne County.

"Everyday we are trying to not only create food insecurity awareness in America, but also in our community and surrounding communities," said Silvio Davis, manager at Panera Cares. 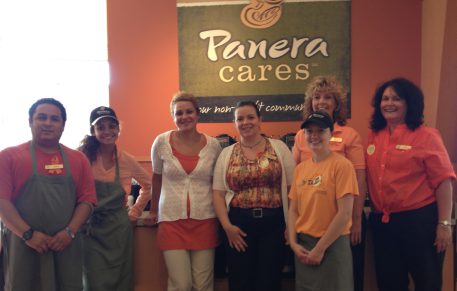