Here's the Buzz on Häagen-Dazs' Plan to Protect Honeybees

Last week, a few journalists, a farmer, an entomologist and an ice cream man drove two hours southeast from Oakland to Chowchilla, California. It’s an in-between place most people never will visit — the neighborhood bar is a lonely box with one window — but if you’ve eaten an almond in the United States, you depend upon this community. Its riches are rooted in nature.

"Keep your eyes open," said Alex Placzek, brand director of Häagen-Dazs, as we started to doze off, lulled by the churning of silent, stately windmills and hills gently rolling by our van’s windows. "When we get to the almond farm, it’s going to look like a snowstorm of pink petals as far as the eye can see."

We pulled into Harris Ranch, the farm that grows all of the almonds that the food company uses in its U.S. products — and were treated to the sight of 7,500 acres of almond trees in their annual spring bloom. The Nestlé USA-owned brand was there to celebrate its partnership with Xerces Society, a nonprofit that protects wildlife through the conservation of invertebrates and their habitats. With the organization’s help, the ice cream maker has planted the largest pollinator habitat in the United States.

By working with its farmer suppliers, Häagen-Dazs is helping fortify the way ingredients are grown to support bees and other pollinators. Without them, more than one-third of the company's ice cream flavors would melt off the market. There would be no almonds in Rocky Road, no tart cherries in Cherry Vanilla, or sweet mango in sorbet.

"Invertebrates are the biggest class of living organisms on Earth," said Eric Lee-Mäder, pollinator conservation program co-director at Xerces Society. "These are the animals that cycle nutrients. They feed other wildlife, whether they’re salmon or songbirds. In the case of pollinators, these animals pollinate our crops."

These invertebrates are also the backbone of the agricultural economy. "One in every three bites of food we consumer is the direct product of insect pollination," Lee-Mäder said. "The service is worth at least $20 billion per year (PDF) to U.S. agriculture." That amount could double if you count alfalfa and other livestock feed, Xerces estimated.

Pollinators help over 85 percent of the world’s flowering plants and more than 100 crops reproduce, according to the nonprofit. An estimated 20,000 species of bees are buzzing worldwide, with up to 1,600 types making their home in California. The European honeybee is just one type of pollinator that has captured our imagination and our fears, although very few bees are likely to sting unless they are grabbed or stepped on. Surprisingly, most bees aren’t social, choosing to live in holes in the ground rather than hives.

"One in every three bites of food we consume is the direct product of insect pollination. The service is worth at least $20 billion per year to U.S. agriculture."

The wildflower understory is a mix of California poppy, baby blue eyes, Great Valley phacelia and more, formulated based on field trials conducted by the Xerces Society, the Natural Resources Conservation Service (NRCS), Hedgerow Farms and the University of California at Davis.

"We wouldn’t have our most popular ice cream flavors if we didn’t have bees," said Placzek. "We started the Häagen-Dazs Loves Honeybees campaign in 2008, through which we donated more than $1 million to pollinator research and education. Since then, we’ve been focused on the plight of our honeybees, so we planted a hedgerow to surround the farm so that bees, butterflies and other native pollinators have a place to live and a source of food year-round."

Indeed, the hedgerow serves as diverse, year-round food for pollinators and protects them from bird predators and pest insects. Almond shells are recycled as hedgerow mulch, a nod to the circular economy. It also increases the soil’s water capacity, which helps mitigate drought, and provides a measure of carbon sequestration. Attracting many kinds of pollinators boosts colony health, strength and resilience, which benefits the crops that bees visit.

"You see natural pest suppression in a hedgerow," said Hillary Sardinas, the Pacific Coast pollination specialist at Xerces Society for Invertebrate Conservation. "You get benefits to songbird populations and reduce the need for insecticides."

There is a desperate need for sustainability measures to help pollinators, stated the Xerces Society, named for the Xerces blue butterfly, the first butterfly species to go extinct due to human-caused environmental change. Honeybees have been in steep decline due to pests, diseases and other factors. Native bees are also dying: In the mid-1990s, the yellow-banded bumblebee was one of the most abundant bees in the midwest. Just a decade later, it made up less than 1 percent of Wisconsin’s bumble bees. In Oregon, Franklin’s bumblebee has gone extinct.

"Conventional agriculture relies on single crop farming, which results in farms that lie dormant much of the year with little to no food source to help pollinators survive," said Mäder. "The essential needs of bees and other pollinators are in jeopardy due to habitat loss, pesticide use and introduced diseases. In fact, many farms have to ship in bees to pollinate crops. ... Increasing the number of pollinator-friendly gardens and landscapes will help revive the health of the bees, butterflies, birds, bats and other pollinators across the country."

At lunch, we were served a meal created by Google chef Charlie Ayers to highlight delicacies that would disappear along with bees: Pumpkin, blueberry, apple and, of course, honey. I was seated next to Gene Brandi, who has operated a bee business in Central California for more than 30 years. He served on the board for the American Beekeeping Federation and was chairman of the National Honey Board.

For this project, the Xerces Society served as a conduit between brands, which had the vision for bee sustainability, and farms, which supply the company’s crops but may feel at a loss to cope with declining pollinator populations.

"Farms are risk-averse," said Keith Kwan, a representative of Harris Ranch. "When you have all of your eggs in one basket, your yearly crops become your baby. Things take a long time to percolate down in farming operations — sometimes it takes three or more years for trees to recover from drought.

"Farmers want to do what’s been working in the past. You keep a clean orchard floor; you spray down growths and weeds so you don’t have a habitat for insects. This prevents crop eaters like groundhogs, but by doing that, you also take out a lot of native flowers, too. You need a collaboration between businesses to educate people that those flowers [planted in the hedgerow] have a use."

According to Mike Desso, director of safety, health and environment at Nestlé, you also need collaboration between competitors.

"For us, sustainability encompasses the passion of different individuals in many roles across the organization," he said. "The pollinator issue is important for the whole business and for food production across the globe. Our competitors and food service industries are working in this area because we have a common interest in the global food supply. I’d encourage us to keep collaborating and finding projects that can help the natural world be more resilient."

Late last year, General Mills gave $2 million to the Xerces Society and the NRCS. That money will add more than 100,000 acres of bee and butterfly habitat on or near existing crop lands. The five-year agreement will focus efforts on Minnesota, North Dakota, Nebraska, Iowa, Maine and California.

The investment, matched by the U.S. Department of Agriculture and Xerces, supports six field biologists in these regions who will work with General Mills’ private suppliers to implement a pollinator habitat plan.

"We own brands that use a fair amount of honey as key ingredients," he said. "Over the last six years, we have invested $6 million in pollinator support efforts focused on reinvigorating pollinator habitat. There’s a broad consensus that the most important thing we can do is invest in rebuilding pollinator habitat in the agricultural landscape.

"It’s imperative for us as a company to operate in a way that ensures Mother Nature works optimally for all of us well into the future. It’s an incumbent part of our business model to look at the total ecosystem level."

As the day wrapped up under the hot Central Valley sun, I observed a chubby striped bee examining the edge of my coffee cup. Usually, this would cause people to jump up or swat at the critter, but here, they were welcome guests for lunch. The bumblebees were the star act, and we their humble visitors — in fact, we can’t survive without each another. 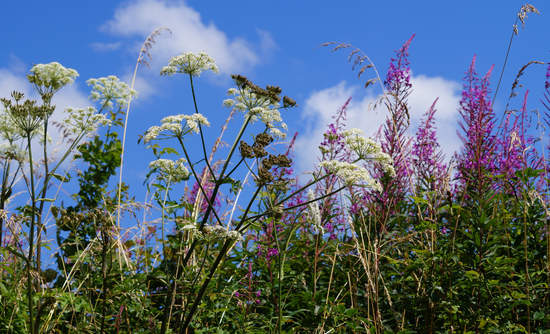 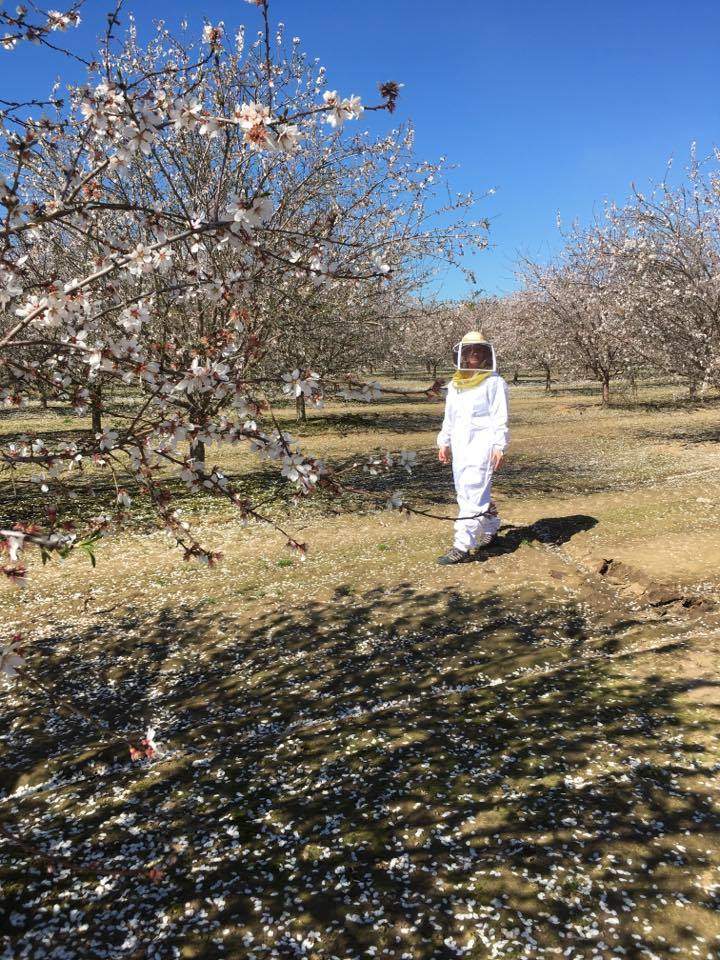 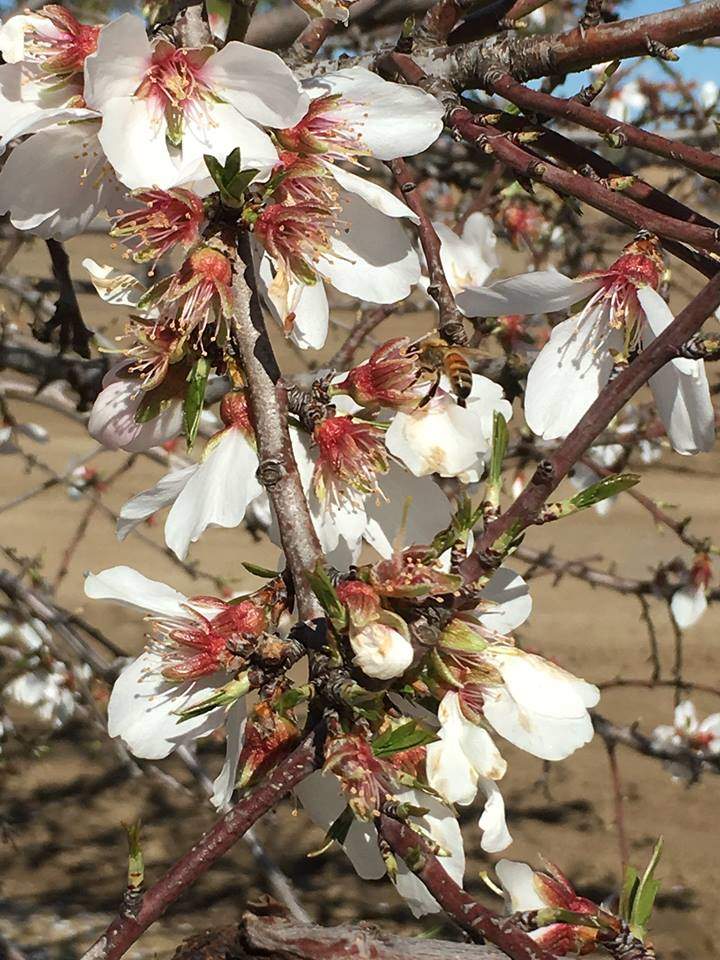