Norfolk Southern’s intermodal corridor strategy continued to advance in 2013. The most significant developments were the opening of regional intermodal terminal facilities in Charlotte, N.C., and in Franklin County’s Greencastle, Pa. The two facilities are the last “keystone” terminals planned in the first phase of the Crescent Corridor improvement program.

The terminals complement regional facilities opened in 2012 on the corridor at Rossville, Tenn., near Memphis, and at McCalla, Ala., near Birmingham. Together, the four terminals provide capacity to remove more than 1 million long-haul trucks off of interstate highways across the 11-state corridor.

Charlotte Regional Intermodal Facility
The Charlotte facility replaced an existing 40-acre terminal near downtown that was overcrowded and lacked room to expand. To accommodate traffic at the old facility, the company operated a satellite parking lot about five miles away, unloading containers from trains and draying them to the lot for pickup. This process was costly, consumed time, and made it more difficult to compete with trucks for long-haul freight.

The new terminal, uniquely situated between runways at the Charlotte Douglas International Airport, has ample space for growth and truck-competitive service. It covers 200 acres and offers three loading tracks, more than 1,300 parking spaces, and the capability of 200,000 container lifts annually. Located near Interstate 485, the terminal is easily accessible to short-haul truckers making last-mile pickups and drop-offs for customers, reducing congestion and unnecessary emissions caused by stalled traffic and idling trucks.

Much of the business at the new Charlotte terminal is transcontinental freight moving to and from Texas markets, the West Coast, and Mexico.

“This intermodal facility is projected to bring billions in business, and places Charlotte even more in the manufacturing, distribution, transportation, and economic growth business.”
ANTHONY FOXX, former Charlotte mayor and current U.S. Secretary of Transportation, speaking at the May 2012 groundbreaking of the new Charlotte terminal

Franklin County Regional Intermodal Facility
Located in Greencastle in south central Pennsylvania, the 200-acre Franklin County facility places Norfolk Southern into a new market that serves as a freight gateway in the mid-Atlantic region. The terminal complements existing intermodal facilities at Harrisburg and Rutherford, Pa., providing an additional option for customers in southeastern Pennsylvania, western Maryland, and northern Virginia to connect with domestic and world markets.

The facility, less than a mile from Interstate 81, has 670 trailer and container parking spots. For some customers, the new terminal reduces the length of truck drayage, one of the biggest shipping expenses, offering customers a more affordable option and the possibility to remove trucks from I-81.

Rail traffic through the terminal moves north and south and runs to such markets as Memphis, Tenn., Charlotte, N.C., and Atlanta. Greencastle also serves as an anchor for freight moving to and from Mexico. Its opening was key to our ability in early 2013 to begin offering 18 new service lanes to three regional Mexican markets, including business in auto parts and appliances. Other product moving through the terminal includes paper, plastic, and food products.

Markets served include Baltimore, Perryville, Eldersburg, and Frederick in Maryland; Carlisle, Mechanicsburg, and York in Pennsylvania; and Raphine, Winchester, and Covington in Virginia.

“These facilities are proven centers of business growth, and I am sure it will create many opportunities for Franklin County and the region. I have long supported freight rail because of its efficiency and see this terminal as a vital infrastructure improvement.”
U.S. Rep. BUD SHUSTER, chairman of the U.S. House Committee on Transportation and Infrastructure

“Since the facility opened, more than 2 million square feet of new construction has commenced in Franklin County, that when completed will lead to more than 1,000 new jobs.”
MIKE ROSS, president of the Franklin County Area Development Corporation

Crescent Terminals Are Efficient, Speedy, and Green
All four of the new regional intermodal facilities constructed on the Crescent Corridor are designed for ease of business and minimal environmental impact. That includes use of high-tech systems and low-emissions equipment.

THE LEED STAMP OF APPROVAL
In 2013 and early 2014, the U.S. Green Building Council officially certified that the administration buildings at Norfolk Southern’s regional intermodal facilities at McCalla, Ala., and Rossville, Tenn., opened in 2012, meet the best-practice standards of Leadership in Energy and Environmental Design.

New terminal facilities opened in 2013 in Charlotte, N.C., and Greencastle, Pa., also incorporate LEED design standards, but have not yet received official certification. 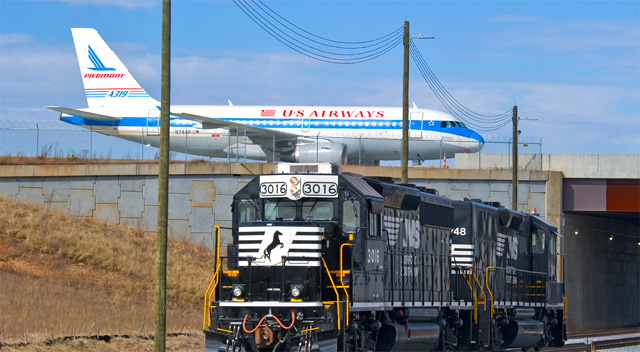 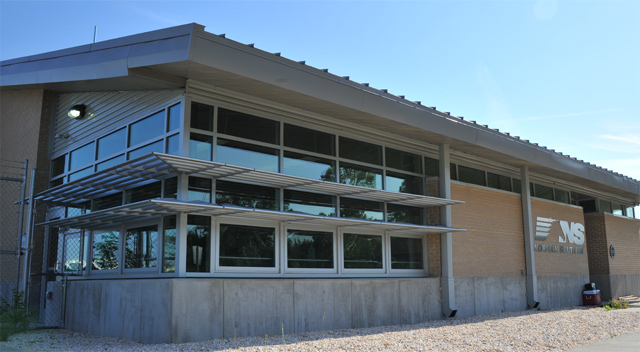