Jul 7, 2015 8:10 AM ET
Tweet This:
Hear how one #AmgenScholars alumni is working to get her graduate degree w/ the aim to give back: http://bit.ly/1HsEoTG #science
Blog

As a child, Amgen Scholar Mobolaji Fowose and her family traveled back and forth to the US from their hometown outside of Lagos, Nigeria. They were in and out of hospitals, seeking a diagnosis and treatment for her younger sister who, as a baby, had bacterial meningitis and began to have recurrent seizures.

Fowose’s early exposure to clinical settings is one reason why she became captivated by science and medicine, she says. When she was 11, her family settled in the US permanently to get care for her sister, who was eventually diagnosed with cerebral palsy, a brain disorder that affects muscle movement and motor skills. Even with access to better hospitals, there was nothing the family could do to reverse the symptoms: they confronted limits to what basic and clinical research had revealed about the disorder. Fowose wanted to change that, in particular, by getting involved with brain research. “I knew I wanted to be an integral part in discovering something or adding to scientific knowledge,” she recalls.

At her home institution, the University of Maryland, Baltimore County, Fowose conducted HIV-related research and, for one spring semester, she worked in a skin care and alcohol prevention lab at Penn State University. She applied to the 2013 Amgen Scholars Program to get another taste of research — this time, in neuroscience. “I wanted to explore research in neurology and I knew going to Washington University in St. Louis would afford me that opportunity,” she says.

"I’m glad I had this experience because it taught me patience. I learned the importance of being meticulous. You have to work at it until it works.”

At first glance, the project seemed straightforward — a matter of setting up the lab’s new eye tracker equipment and running subjects — but Fowose soon learned how frustrating real science could be. Charged with creating a new software program for the eye tracker to make specific types of measurements, Fowose and her mentor battled through a variety of technical setbacks. Two weeks before the end of the summer — and close to the point of tears — Fowose was finally able to gather data.

The Amgen Scholars Program at Washington University also allowed Fowose to get a firsthand glimpse into the clinic: with permission to step outside of the lab, she shadowed a physician researcher who specializes in pediatric hematology and oncology during his rounds at St. Louis Children’s Hospital. “It was amazing to see the medical side of things. This gave me renewed energy every time I left clinic and went back to lab.”

Now in her senior year studying biology, Fowose plans to pursue graduate work in public health, medicine, and research — with the goal of combining research with clinical work in underserved or poverty-stricken areas. Her summer as a Scholar, she says, has set her up well for achieving these goals. “My experience was amazing. After leaving Washington University, I knew that I was capable of conducting research and also learned that it can be fun,” she says. 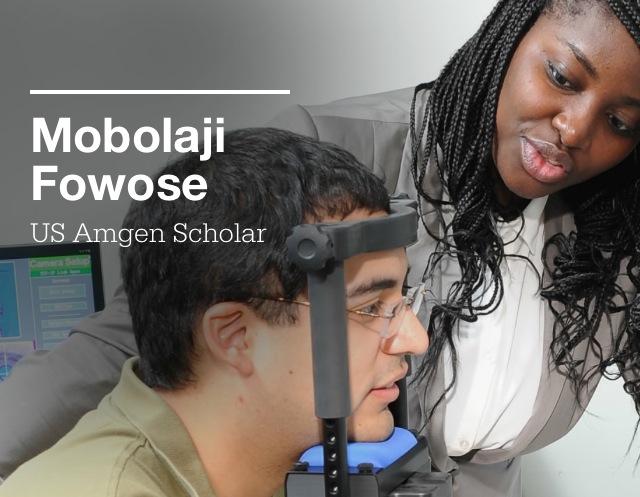