Water is a resource that most of us take completely for granted. Thirsty? Just walk over to the sink and turn on the faucet; or head over to the fridge and grab a cold drink. Yet, there are an astonishing number of people in the developing world who could not even dream of doing such a thing. As many as 300 million Africans are living today without access to a dependable source of clean, safe water for drinking, cooking, washing, growing crops, or any of the essential things we use water for every day. Therefore, sustainable access to clean water is a catalyst for development across the African continent. Now, a collaborative effort, known as the Replenish Africa Initiative (RAIN), is working with communities and water service providers across Africa to help address the critical issues associated with lack of water access. RAIN is on pace to provide clean water access for over 2 million people by the end of 2015 and 6 million by the close of 2020.

A key strategy for reaching this many people is partnering with utilities to create and improve service for lower income communities.  Take Madagascar, for example. Of the 2.2 million people living in Madagascar’s capital city of Antananarivo, nearly half lack access to clean water and sanitation services. That’s close to a million people. RAIN, a flagship water access program of The Coca-Cola Africa Foundation (TCCAF) has partnered with an organization known as Water & Sanitation for the Urban Poor (WSUP) to help bolster and strengthen the water distribution infrastructure. A total of three projects in Madagascar have provided water to 322,000 people, while saving over one billion liters from being wasted from leaky pipes.

RP Siegel, author and inventor, shines a powerful light on numerous environmental and technological topics. He has been published in business and technical journals and has written three books. His third, co-authored with Roger Saillant, is Vapor Trails, an eco-thriller that is being adapted for the big screen. RP is a professional engineer – and a prolific inventor, with 50 patents, numerous awards, and several commercial products. He is president of Rain Mountain LLC and is an active environmental advocate in his hometown of Rochester, N.Y. 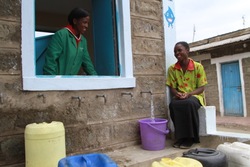