Brian Burton, President and CEO of Three Square Food Bank, was nearly at a loss for words to describe the results of this year's MGM Resorts Canned Food Drive totals.

"The first year (of the food drive), I said I was impressed. The second year, you exceeded our expectations. Last year blew us away. What can I say this year? Keep this up, and we'll need another warehouse," he said.

His remarks came during a special event last month, to reveal the results for the 2014 food drive benefiting Three Square Food Bank. The grand total, 1.6 million pounds, exceeded both last year's 922,000-pound total and this year's million-pound goal. The winning team, accounting for the most pounds of donated food per employee, was the MGM Resorts Corporate Entities team, which raised 376,255 pounds, or more than 146 pounds for each employee. Accepting the trophy on behalf of his Corporate colleagues was Chief Operating Officer Corey Sanders.

"I'm proud to be up here today. As the biggest employer in Nevada, it's always been our mantra to make sure that we take care of the communities that we work in. There's not any bigger issue than hunger in southern Nevada. There's a lot of need," he said. "We take this initiative very seriously and we have great partners working with Three Square in trying to address this issue."

Corporate wound up the overall champion. In second place was Bellagio, collecting more than 63 pounds of food per employee. Bellagio alone accounted for nearly one third of the overall donation this year: more than 512,000 pounds.

Many resort teams turned in impressive figures. The Mirage, Monte Carlo, ARIA/Vdara, Signature, New York-New York and Luxor/Excalibur all more than doubled their totals from 2013. The collective Companywide effort, 30-plus pounds of donated food per employee, was up from 17 pounds last year. Not surprisingly, the 1.6 million pound total set another record for Three Square.

"Boy did you do it up big this year. It is the largest employee-donated canned food drive in the history of our state," said Mr. Burton. "We're checking into it, but I think it's the biggest one in the country. You've given us a push well into 2015 and I hope that that warms your heart. Thank you so much."

This year marked the first year that MGM Resorts encouraged cash or canned donations for the Food Bank. Donations made in cash will account for more than 1.3 million meals for people in need across Southern Nevada during the coming months. A large portion of Three Square's warehouse is full of pallets of food from this year's drive because Three Square has already been shopping with much of the employees' cash donations. There were pallets of cereal, peanut butter, pasta, canned soups and more stacked to the ceiling.

"These food pallets represent the collective love and heart and support that we as MGM Resorts feel for those in our community who need a helping hand," said Chief Diversity Officer Phyllis James. "I just want to extend a deep and heartfelt thanks to our employees for their tremendous effort. Giving is a part of the character of our company." 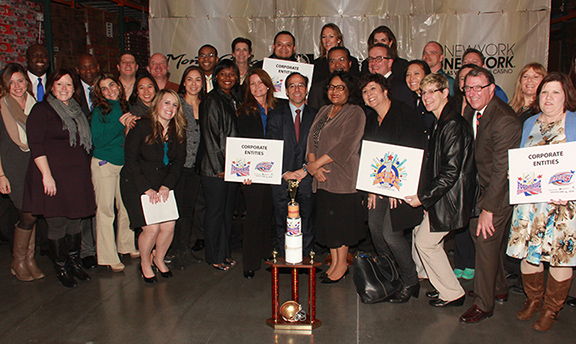 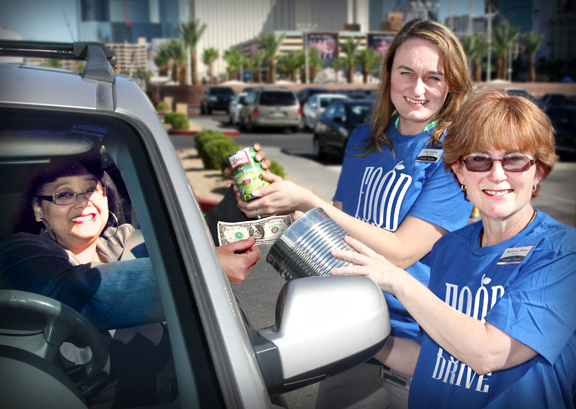 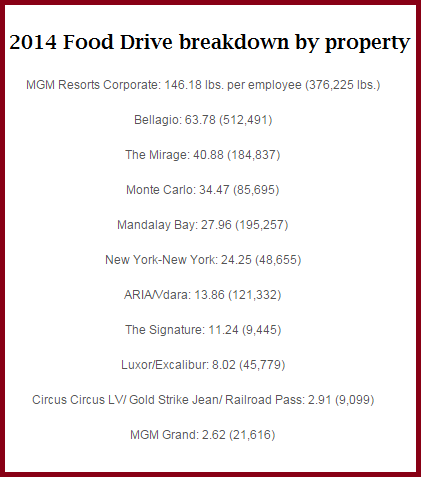