What’s New at Straus Family Creamery in Winter of 2013?

Also, take a look at this new video from EcoFarm's Water Stewardship Program with an interview of Albert Straus explaining the Methane Digester at the Straus dairy.

Drake's Bay Oyster Company is a family-owned, environmentally sustainable farm that produces nearly 40% of all oysters harvested in California. It is located in the Drake's Estero, within the Point Reyes National Seashore National Park, only a few miles from the Straus Family Dairy.

On November 30th, Secretary of the Interior Ken Salazar decided against renewing the 40-year lease by the government, effectively putting the farm out of business with a 90-day deadline to leave the premises. The 31 employees, as well as the Lunny Family, are now under threat to lose their work, housing and lifetime achievements.

In the 1960s, when the Seashore was first proposed, it was the intent to work toward a harmonious co-existence between agriculture and wilderness, a structure that should be preserved and not destroyed.

We believe that preserving family farms is essential for our future, because they build the foundation of a sustainable food system in the United States. For example, all six dairy farms located within the Seashore National Park will become certified organic by the end of this year.

It is family farms, like Drake’s Bay Oyster Company, that seek sustainable solutions for agriculture and wilderness to co-exist. They both contribute immensely to the quality of life in Marin County.

The Lunny Family is not leaving without a fight: They sued the government, accusing Secretary Salazar of revoking property rights without due process provided by the National Environmental Policy Act and claiming that the decision was based on false, biased and misrepresented science.

We urge you to support the Lunny Family by taking two simple actions:

1.     Visit their website to learn now you can help
2.     Endorse the farm by signing your name

Latest UPDATE: On Monday, February 4, a judge upheld the removal of the oyster farm.Read more...

New – Organic NuScoop Frozen Dessert in Three Delicious FlavorsOrganic NuScoop is our newest creation, that comes in Dutch Chocolate, Coffee and Strawberry. It is a delicious, organic frozen dessert (it’s too low in fat to be called ice cream) that is packed-full of nutrition, which makes it a good snack or dessert for people on-the-go or an ideal athlete recovery food. It's like an organic energy bar in an ice-cream cup.

This is a completely new product, not only for ice-cream lovers, but also for us. We started with our artisan ice-cream recipes and organic, wholesome ingredients and created a delicious dessert with enhanced health benefits.

The high nutritional value is achieved by adding healthful oils, such as sunflower and virgin coconut oil, that provide Omega 3s and 6s and support energy. We also use a low-glycemic sweetener blend, featuring organic agave nectar, to provide sustained energy.

For additional nutrition, we added whey-protein concentrate, as well as 25 vitamins and minerals - you can get complete nutritional value from this little 4oz. cup.

Click on this thumbnail to see our infographic on NuScoop.

To find a store near you, that carries NuScoop, visit our website.

GMO labeling After Prop 37 - What's Next?In November of last year, Prop 37, the California Right To Know Campaign to label GMOs, lost by a small margin: but a whopping 48.6% of Californians voted in its favor, which is more than six million voters. Considering that the campaign was outspent 5:1 by the opposition, this can be considered a big success.

We have posted a letter from Albert Straus on our website with his thoughts on the outcome of the election. Please share yours by sending an email to family@strausmilk.com or by posting on our Facebook or Twitter pages.

The tremendous educational campaign that accompanied Prop 37 certainly had its effect: A similar ballot, WA I-522, is likely to qualify this year in Washington State, after an estimated 350,000 petition signatures were turned in on December 31.

The federal Just Label It campaign is also kicking back into gear with a newly released video, featuring Ziggy Marley and other celebrities in support of labeling.

We look forward to continuing our educational work on GMOs with like minded consumers, thought leaders, volunteers, organizations and companies. Prop 37 was really just the beginning in the journey toward food transparency.

Customer Profile: Ancient Organics GheeYou might guess that some of our organic dairy products (especially our butter!) can be enjoyed in dramatically different ways than in their original form. Our Organic Ice-Cream Base is transformed into many delicious flavors and multiple ice-cream shops in the greater Bay Area, such as Bi-Rite Creamery and Humphry Slocombe. Our Organic Barista Milk is served in delicate espresso drinks across the state and our Organic Sour Cream finds its way into intricate creations at many restaurants.

Here is one way in which you can enjoy our Organic Butter: Ancient Organics in Berkeley has been using our butter to make their organic Ghee since 2003. Ghee is purified butter, that is carefully made by removing all the milk solids.

Known for its delicious taste and healing properties, Ghee has a very high flash point of 485ºF, which means that it doesn't burn very easily and can be used instead of oil. The very high fat content of our churned, organic butter of 85% contributes to the purity and quality of Ancient Organics Ghee.

Celebrated by many for its rich flavor and nutritional benefits, Ghee is a good source of Omega 3 and Omega 9 essential fatty acids along with Vitamins A, D, E, and K., which comes from the sweet, coastal grasses our cows graze on in Marin and Sonoma Counties.

Matteo Maxon, owner of Ancient Organics, purifies the butter to make the Ghee only on the full or waxing phase of the moon, which is believed to amplify healing qualities and taste of Ghee by Ayurvedic tradition.

The process of making Ghee is quite simple: First the organic butter is slowly and carefully melted in large pots and brought to a boil. Soon, the milk solids start to separate from the oil and as water continues to evaporate, the milk solids begin to caramelize. The milk solids are skimmed off the surface, and after meticulous straining, the remaining oil, now Ghee, is hand-filled into jars.

European-Style Yogurt - What Does that Really Mean?When making our organic yogurt, we feel very strongly about its taste. The flavor we like is the result of many factors, but mainly comes from the organic milk we use, of course, which comes from cows grazing the hillsides of Sonoma and Marin Counties.

Contributing to the flavor is also a specific blend of active, live cultures that are added to our organic milk.

The yogurt is slowly cultured in stainless steel vats, where it stirred, set and cooled. This makes a creamier and smoother type of yogurt, than one that is cooked and incubated inside its plastic cup.

We don't ever use any additives or stabilizers to thicken our yogurts. It comes out creamy, pours right out of the container, is tart and full of flavor. European-style, voilà.

Butterscotch Sauce:
¾ cup brown sugar, firmly packed
1 cup Straus Family Creamery heavy cream
¾ stick (6 Tbsp) Straus Family Creamery butterDirections:
1. Preheat oven to 350 degrees. Grease deep 8” round cake pan; line base with parchment paper.
2. Combine dates and boiling water in food processor or blender. Stir in baking soda; cover with lid and let stand 5 minutes.
3. Process or blend date mixture with butter and brown sugar until pureed. Add eggs and flour, blend until just combined.
4. Pour mixture into prepared pan and bake uncovered for about 55 minutes (cover with foil the last 10 minutes if pudding starts to over-brown).
5. Prepare Butterscotch Sauce: Combine ingredients in medium saucepan; stir over low heat until sauce is smooth and slightly thickened. Don't thicken the sauce too much as it needs to be absorbed into the pudding.
6. When ready, take pudding out of the oven and let stand 10 minutes. Pierce holes in the cake with a skewer and drizzle 1/3 - 1/2 of the warm butterscotch sauce into the holes (sauce cannot be thick). Serve remaining sauce on the side. 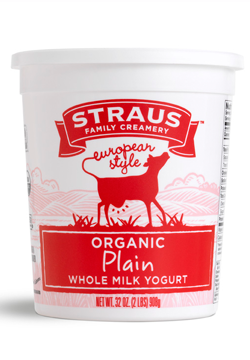