Washington, DC, July 15, 2014 /3BL Media/ – For Toyota Senior Adviser Don Esmond, who spent 6 years serving our country as a decorated Marine, the education and home ownership benefits provided under the GI Bill meant something special: A path to a brighter future. “The GI Bill helped us afford our first house with a backyard,” said Esmond. “Today, with unemployment so high among our veterans, it’s more important than ever.” Toyota is helping preserve documents like the Servicemen's Readjustment Act of 1944 – more commonly known as the GI Bill – and others that mark milestones in our nation’s history through a $100,000 gift to the Foundation for the National Archives. Today, after five weeks on display, it will be removed from exhibition because of strict archival conservation guidelines that allow display for roughly two to four weeks. However, thanks to Toyota’s exhibition support, visitors can continue to view and learn about the GI Bill online at http://www.archivesfoundation.org/documents/g-i-bill-rights/ when it is not on display at the National Archives Museum. “It’s an honor to have Toyota preserve this special part of America’s rich history because of its impact on so many veterans, who sacrificed so much to keep our country safe and free. It’s important that they are given help restarting their civilian life,” said Esmond.  As a helicopter pilot, he flew more than 900 missions over Vietnam and received the Silver Star, Distinguished Flying Cross, 45 Air Medals and the Purple Heart. He also noted that Toyota’s involvement with the National Archives initiative was fitting because of its 60-year presence in the U.S. The GI Bill is one of ten historic documents in rotation in a National Archives exhibit sponsored by Toyota’s gift. Historic documents, from Congressional passage of the Bill of Rights in 1789 to President Nixon’s letter of resignation in 1973, will be part of the notable records Toyota is helping to protect. Helping veterans is nothing new to Toyota. The company’s many programs include “Hiring Our Heroes,” a partnership with Medal of Honor recipient Sgt. Dakota Meyer and the U.S. Chamber of Commerce’s National Chamber Foundation to help veterans make the transition from military to civilian jobs.

About The G.I. BillThe GI Bill assisted veterans through a wide variety of readjustment programs that included education and workforce training, loan guarantees for homes or businesses, and unemployment pay. In the years following WWII, millions of veterans took advantage of GI Bill programs by going to college or financing a new home. Before WWII, a college education and homeownership were luxuries largely unattainable for the average American. But thanks to the GI Bill, in the peak year of 1947, veterans accounted for 49 percent of college admissions. In addition, the veterans Administration backed nearly 2.4 million home loans for WWII veterans from 1944 to 1952. The GI Bill was updated both in 1984 and in 2008. The 2008 law provides veterans with active duty service on, or after, September 11, 2001, improved educational benefits including a living allowance and the ability to transfer educational benefits to family members. About Toyota Toyota (NYSE:TM) established operations in the United States in 1957 and currently operates 10 manufacturing plants.  There are nearly 1,500 Toyota, Lexus and Scion dealerships in the United States, which sold more than 2.2 million vehicles in 2013. Toyota directly employs over 32,000 in the United States and its investment here is currently valued at more than $20 billion, including sales and manufacturing operations, research and development, financial services and design. Toyota's annual purchasing of parts, materials, goods and services from U.S. suppliers totals over $32.2 billion.
Philanthropy
Toyota
GI Bill
Foundation for the National Archives
philanthropy
community giving
helping veterans 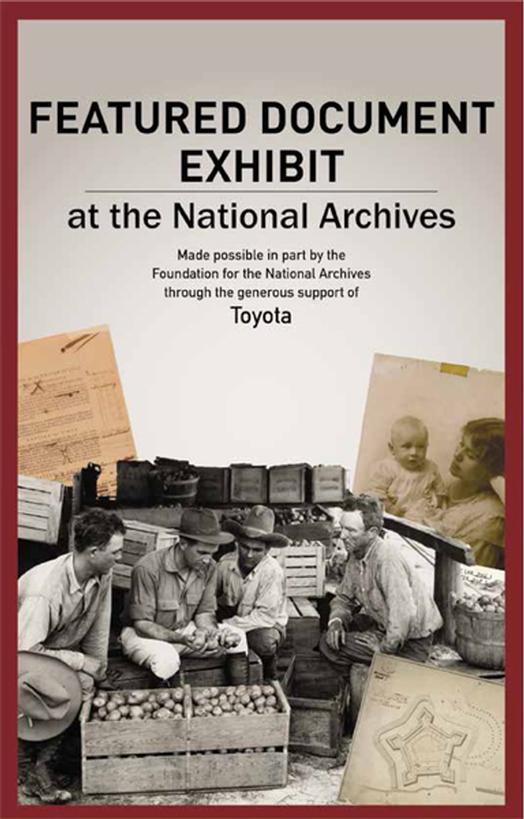