TORRANCE, Calif., July 17, 2014 – Toyota today announced its partnership with the Special Olympics World Games Los Angeles 2015 (LA2015) at an event that also debuted the first gathering of the World Games Global Messengers. World Games officials, Toyota associates and World Games global media partner ESPN gathered to celebrate Toyota’s goal of delivering a front-seat view of the spirit and transformative power of the World Games to the public leading up to and during the competition. The World Games will take place in Los Angeles beginning July 25, 2015.“Special Olympics has a life-changing impact on everyone who experiences it, both on and off the competition fields,” said Michael Rouse, vice president of diversity, philanthropy and community affairs for Toyota Motor Sales, U.S.A., Inc. “Education is one of Toyota’s core philanthropic priorities, and the World Games is an inspiring event that unites the international community around the values of inclusion and acceptance. We look forward to sharing the power of the Games with as many people as possible and are proud to have a role in supporting this global event.”Toyota’s participation in the Games includes the use of 400 vehicles by LA2015, the organizing committee for the Special Olympics World Games, in addition to dealer involvement across the U.S, activating the power of employee volunteerism at competition centers, athlete village sponsorships and communication activities which support education and advocacy for people with intellectual disabilities. While this marks Toyota’s first time sponsoring the World Games, the company has built a 28-year-long relationship with the Special Olympics movement in Southern California.“It’s an honor to have Toyota, a world-class brand, join the LA2015 effort as our official automotive partner,” said Patrick McClenahan, president and CEO of LA2015. “Toyota’s enthusiasm for the World Games will have a lasting impact as we jointly celebrate the courage, determination and joy of our athletes.”Today’s event also included the first gathering and public introduction of the World Games Global Messengers, 15 Special Olympic athletes selected from 11 different counties across Southern California. The athletes, who participate in a combined 12 sports ranging from bocce to volleyball, will represent the LA2015 organizing committee at events from now through the World Games next July.

About ToyotaToyota (NYSE:TM), the world's top automaker and creator of the Prius, is committed to building vehicles for the way people live through our Toyota, Lexus and Scion brands. Over the past 50 years, we’ve built more than 25 million cars and trucks in North America, where we operate 14 manufacturing plants and directly employ more than 40,000 people. Our 1,800 North American dealerships sold more than 2.5 million cars and trucks in 2013 – and about 80 percent of all Toyota vehicles sold over the past 20 years are still on the road today. Toyota partners with philanthropic organizations across the country, with a focus on education, safety and the environment. As part of this commitment, we share the company’s extensive know-how garnered from building great cars and trucks to help community organizations and other nonprofits expand their ability to do good. For more information about Toyota, visit www.toyotanewsroom.com. To date, Toyota has contributed more than $700 million to American nonprofit groups. For more information about Toyota’s contributions in the U.S., visit http://www.toyota.com/about. About the 2015 Special Olympics World Summer GamesWith 7,000 athletes and 3,000 coaches representing 177 countries, along with 30,000 volunteers and an anticipated 500,000 spectators, the 2015 Special Olympics World Games - being staged in Los Angeles July 25 - August 2, 2015 - will be the largest sports-and-humanitarian event anywhere in the world in 2015, and the single biggest event in Los Angeles since the 1984 Olympic Games. The 2015 Special Olympics World Games, with the unparalleled spirit, enthusiasm, teamwork, joy and displays of courage and skill that are hallmarks of all Special Olympics events, will feature 25 Olympic-style sports in venues throughout the Los Angeles region. The Opening Ceremony, to be held July 25, 2015 in the historic Los Angeles Memorial Coliseum, site of the 1932 and 1984 Olympic Games, is expected to attract 80,000 spectators. On April 30, 2014, LA2015 and ESPN announced a global programming deal that will see ESPN bring coverage of World Games to millions of fans around the world. Honorary Chairs of the Games are President Barack Obama and First Lady Michelle Obama, with Los Angeles Mayor Eric Garcetti and California Governor Jerry Brown serving as Honorary Hosts. Current Founding Champions and sponsors include The Coca-Cola Company, Mattel, Deloitte, Toyota, Kaiser Permanente, Davis Elen Advertising, AEG, David Geffen, Steven Spielberg and his wife Kate Capshaw, The Walt Disney Company, Knights of Columbus and Bank of America. LA2015, the Games Organizing Committee, is a recognized 501(c)(3) non-profit organization. For more information on the 2015 Special Olympics World Games, including volunteer and sponsorship opportunities, visit www.LA2015.org About Special Olympics InternationalSpecial Olympics is an international organization that changes lives through the power of sport by encouraging and empowering people with intellectual disabilities, promoting acceptance for all, and fostering communities of understanding and respect worldwide. Founded in 1968 by Eunice Kennedy Shriver, the Special Olympics movement has grown from a few hundred athletes to more than 4 million athletes in 170 countries in all regions of the world, providing year-round sports training, athletic competition and other related programs. Special Olympics now takes place every day, changing the lives of people with intellectual disabilities all over the world, from community playgrounds and ball fields in every small neighborhood’s backyard to World Games. Special Olympics provides people with intellectual disabilities continuing opportunities to realize their potential, develop physical fitness, demonstrate courage, and experience joy and friendship. Visit Special Olympics at www.specialolympics.org and engage with us on: @specialolympics, fb.com/specialolympics, youtube.com/specialolympicshq, and specialolympicsblog.wordpress.com. 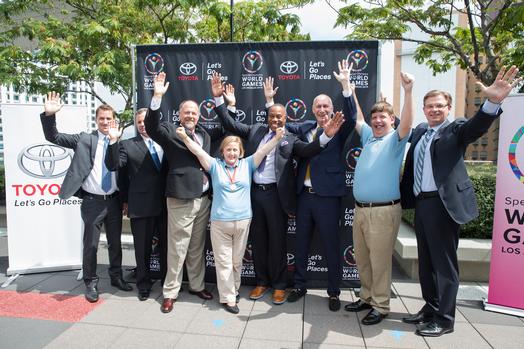