Read the first article: LEADER Starts to Pay Off

During his freshman year in college, Jonathan Collins left school to take a job inspecting and repairing railcars at Norfolk Southern’s Cincinnati, Ohio, yard. That was 22 years ago, and Collins never returned to the University of Cincinnati – he was having too much fun at NS.

From his days as an entry-level carman to his current role as manager locomotive systems and special projects, Collins has applied his natural technical aptitude to help NS address a number of business challenges involving technology.

Collins first drew notice in the mid-1990s when he helped develop a way to integrate GPS into end-of-train devices, enabling NS for the first time to track location of the air-brake pressure monitors across the system. In 2006, he won the Thoroughbred Award – the precursor to today’s Chairman’s SPIRIT Award for Excellence – after developing the first version of NS’ Track Line View program, the core feature of today’s Unified Train Control System Lite web application. Track Line enables NS users to monitor train activity across the network, including remote online access.

Collins’ most recent contribution, however, might be his greatest. Since early 2011, he has helped manage the development and deployment of LEADER, a train-handling technology that is saving NS millions of dollars in locomotive fuel costs and significantly reducing the company’s environmental impacts.

After Collins joined the effort, the railroad saw an exponential jump in territories capable of supporting LEADER-equipped trains, going from 2,500 track route miles in 2012 to 14,500 route miles by mid-year 2013. Accomplishing the feat was no easy matter for Collins and his team of two reports – Colby Bradley, manager advanced energy management, and Stephen Michael, manager LEADER development.

As Collins explains it, LEADER essentially is a physics engine. It is powered by algorithms that calculate the most fuel-efficient way for locomotive engineers to operate a train, based on track topography and dynamic train forces.

For the GPS-based system to work, Norfolk Southern had to digitally map its rail network. Five years ago, the company deployed helicopters outfitted with infrared laser technology and camera systems to do that. This aerial “fly-mapping” generated a series of latitudinal and longitudinal points and track elevations. The mapping recorded data points every three feet, accurate to within an inch, over roughly 16,000 route miles of track, generating massive amounts of raw data.

The challenge: Collins and his team had to figure out how to efficiently convert all those data points into information that LEADER could use to prompt engineers on locomotive control settings.

“Accurate track data is the core of LEADER,” Collins said. “We needed to match the latitude and longitude data with precision to every curve, railroad crossing at grade, and turnout.”

Collins’ solution combined technology and ingenuity. It involved countless hours of feeding the fly-map data into database management systems such as ACCESS and linking them to Web-based geographical information systems and GPS-based maps, including Google Earth.

Collins also meticulously matched the data to NS timetables. These “bibles” for locomotive engineers list track speeds and mile posts that train crews use for reference while making freight deliveries. Collins worked with road foremen of engines across the network – around 110 of them – to accurately match the fly-map data to the timetables.

An extensive review followed to verify the accuracy of the work, an effort that involved NS’ railroad operations and information technology groups. Collins then worked with New York Air Brake, the LEADER vendor, to incorporate the data into the train-handling software.

“I take a lot of pride in the contributions I’ve made in furthering the technology,” Collins said. “Conserving fuel has a positive impact on the corporation’s bottom line, and it reduces our greenhouse gas emissions and environmental impacts.

“From a sustainability perspective, we need to continue looking for ways to operate more efficiently and reduce our impacts on the environment,” he added. “The more we can be self-sustaining from a fuel-conservation perspective, the better it is for us as a company, as an industry, and as a country.”

Collins and his team continue to work with New York Air Brake on improving LEADER and integrating the technology into other aspects of operations. One enhancement is a feature designed to shut off and turn on trailing engines in a consist based on power needs, further conserving fuel and reducing emissions. Another is an auto control component enabling LEADER to adjust throttle settings.

“We’ve got a very active development process,” he said. “We are trying to build symbiotic relationships between fuel conservation and train movements, to get those two things working better together.  We want to deploy existing technology as rapidly as we can to gain the benefits envisioned and we want to be forward-thinking in how we do business in terms of the tools and techniques we can introduce and leverage with LEADER.”

Read the third article: Engineer Uses LEADER to do his Job Better 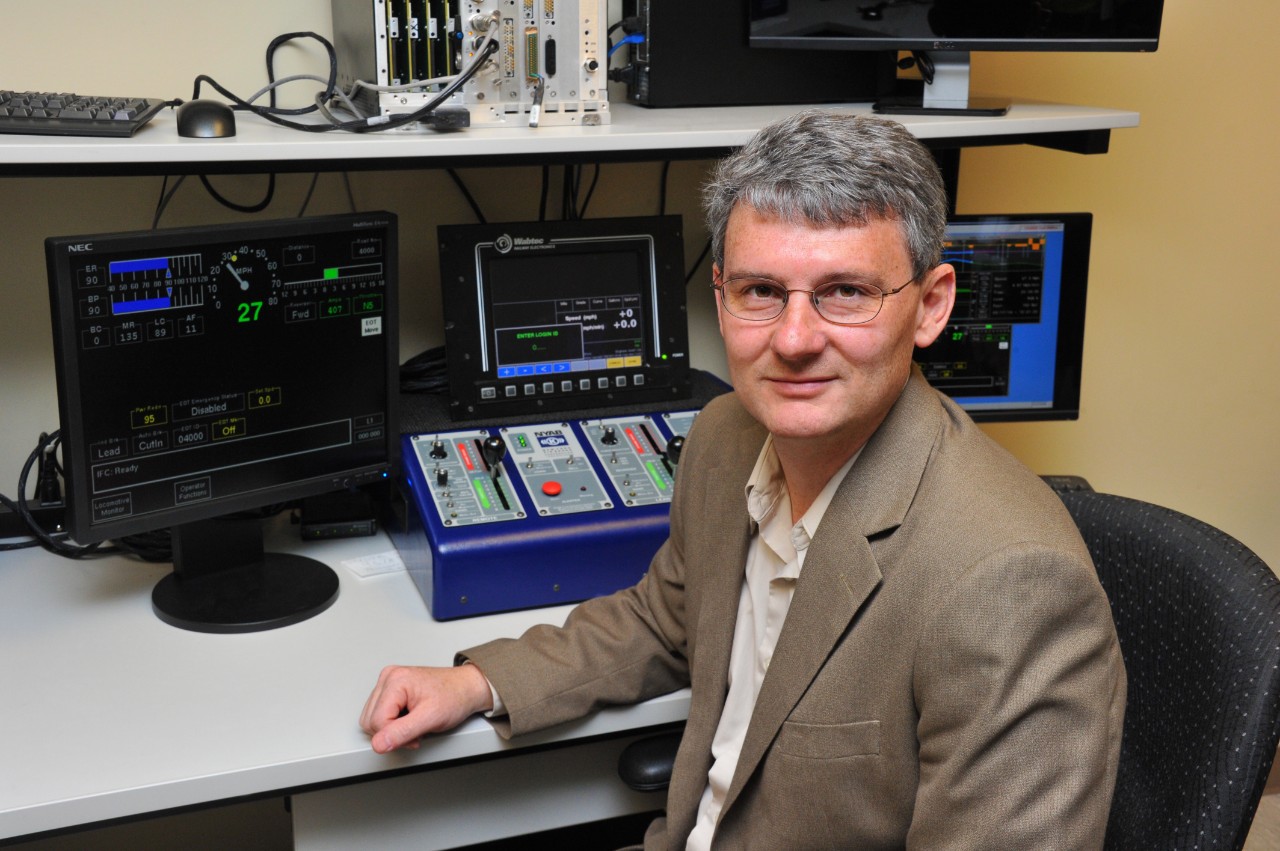