Jun 8, 2016 9:00 AM ET
Tweet This:
Learn how @RorusInc is using funding from @BNYMellon @upprize to further its mission to provide safe drinking water: http://bit.ly/1svgToJ
Article

As the recipient of BNY Mellon’s Social Finance Global Innovation Award, Rorus is moving forward with its mission to enable affordable, safe drinking water throughout the world.

Within a few minutes of meeting Corinne Clinch, you’ll likely find yourself immersed in a conversation on something the developed world largely takes for granted -- drinking water. Clinch is co-founder and CEO of Rorus, a company whose mission is to provide the world with clean, safe drinking water via water filters designed for low-infrastructure areas. Clinch’s transition from Carnegie Mellon graduate student to startup CEO was spurred by her experience testing water purification systems in South Africa, where she was amazed by the potential for using nanotechnology to create water filters that can be easily used wherever necessary. Knowing that it would be easier to enter the market with this new technology as a for-profit company, Clinch and fellow student Uriel Eisen founded Rorus.

Rorus manufactures point-of-use water filters called Filter Packs that allow people without secure access to clean water, such as those in disaster areas or in less developed countries, to safely and immediately sanitize water. Filter Packs can carry 20 liters of water at a time, and with a lifetime duration of approximately 7500 L, they can provide a family of 6 drinking water every day for an entire year. The nanotechnology purification system works without batteries or added chemicals, meets World Health Organization Protective Standards, and kills all types of waterborne pathogens: viruses, bacteria, and protozoa. Rorus is positioning itself to disrupt the existing USD$14bn market for water filters in the developing world, as well as higher margin personal recreation and military markets in the future.

BNY Mellon learned about Rorus through the UpPrize Social Innovation Challenge, a $1 million collaboration between BNY Mellon, the BNY Mellon Foundation of Southwestern Pennsylvania and The Forbes Funds. UpPrize’s mission is to encourage impact investing in southwestern Pennsylvania, linking the private sector with regional nonprofits to identify and champion breakthrough innovations that address critical needs and also produce meaningful and measurable financial benefits.

“We granted Rorus $10,000 through the Social Finance Global Innovation Award because we were impressed by the Pittsburgh-based company’s global mission and potential for social impact,” said Anna Kearney, director of social finance at BNY Mellon. “At BNY Mellon, we are committed to investment activities that have a financial return and positive social or environmental impact – what we call social finance. Rorus is focused on being a commercially viable and profitable company that delivers a product that can significantly improve the lives of millions around the world, making it a sterling example of the kind of company that will draw investors to social finance.”

Rorus has been able to use the additional capital from this grant to fund research, manufacturing and quality control testing. Due in part to BNY Mellon’s investment in Rorus, business for the startup water filtration company is booming. In preparation for predicted sales orders, Rorus is looking to expand its team in the weeks and months ahead. Rorus has already tested and deployed its designs in Nepal and India, and the filters are headed to Nigeria soon. Rorus has worked with a number of NGOs across the world that have identified these regions as locations where the Rorus technology can help address a variety of logistical or implementation problems with existing water filtration systems. They expect to sell more than 15,000 filters in the coming year, enabling water security for nearly 100,000 people.

“Being able to use an additional $5,000 to accelerate testing is part of why we’ve been able to do so much more,” says Clinch. “We had very different approach just six months ago. We’ve been able to pivot quickly and move faster to new designs because of grants such as the Social Finance Global Innovation Award.” 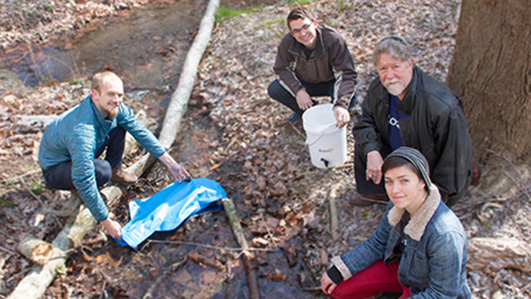