A partnership between National Grid and the Boston Celtics culminated in June with two schools – one in Massachusetts and another in Rhode Island – earning a STEM Lab renovation.

The STEM Lab was awarded through an incentive-based program and viral online campaign, #EnergyAssist, through which middle school students submitted videos and images showcasing their efforts to conserve energy at their schools. The contest ran online through April.

Celtics forward Kelly Olynyk was on hand June 24, along with Marcy Reed, president, National Grid, Massachusetts, to introduce the students of Josiah Quincy Elementary School to their new STEM lab.

Calcutt Middle School in Central Falls, RI, was the other winner. That STEM lab will be unveiled in the fall.

Fewer aspects of my job are more rewarding than supporting programs such as these,” Marcy said. “I’m thrilled to see that these kids are as excited about STEM as we are. Today, they’re engaged as they explore their new STEM lab. Tomorrow, they’re that much closer to becoming the next generation of energy leaders.” 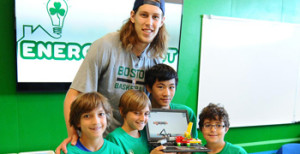