The National Academy of Sciences has announced that Neil deGrasse Tyson, host and executive producer of the hit FOX series Cosmos: A Spacetime Odyssey, will receive the 2015 Public Welfare Medal, the Academy's most prestigious honor. The Public Welfare Medal signifies Tyson's "extraordinary role in exciting the public about the wonders of science."

"Through just about every form of media available, Neil deGrasse Tyson has made millions of people around the world excited about science," said Susan Wessler, home secretary for the National Academy of Sciences and chair of the selection committee for the award. "Ultimately, the success of science depends on the public's understanding of its importance and value. Neil masterfully conveys why science matters - not just to a few, but to all of us."

Tyson is perhaps best known as the host of FOX's Cosmos: A Spacetime Odyssey, a reboot of Carl Sagan's landmark 1980 PBS series. As the host of Cosmos, Tyson takes viewers on a journey through the history of scientific achievement, making even the field's most complex principles, such as the Big Bang or climate change, accessible for all. Cosmos received the largest international rollout in television history, premiering across multiple 21st Century Fox channels in the US, including FOX, FOX Sports 1, and the National Geographic Channel, as well as through the Fox International Channels in 181 countries across 45 languages.

In April, Nat Geo will debut Star Talk, the first ever late-night talk show focusing on science, based on Tyson's popular podcast series of the same name.

In addition to his various projects at 21st Century Fox, Tyson has served as the Frederick P. Rose Director of the Hayden Planetarium of the American Museum of Natural History since 1995. He has also written 10 books and tweets about science frequently to his more than 3 million followers. The Washington Post reports that Tyson is the "first person to receive the award for his efforts in science communication to the general public since Sagan himself won in 1994." 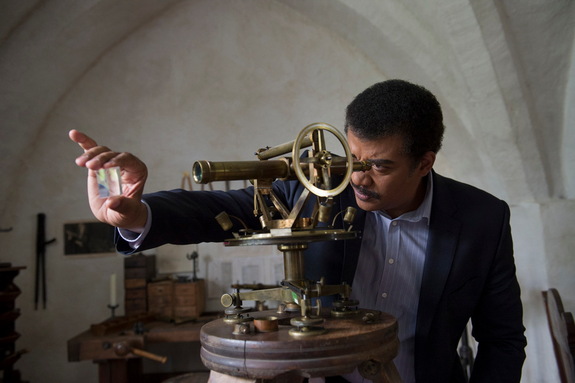