About 40 percent of all edible food goes to waste in the United States, according to the Natural Resources Defense Council. At the same time, more than 50 million Americans are food insecure, meaning they do not know where their next meal will come from.

The shocking contrast is enough to turn your stomach, but one Fortune 500 restaurant company is out to cut food waste totals down to size and turn what was once considered garbage into wholesome meals for hungry families.

Darden Restaurants, which includes popular eateries such as Red Lobster, Olive Garden, LongHorn Steakhouse and Bahama Breeze, is celebrating the 10th anniversary of its Harvest program, a food rescue initiative that distributes unserved food to community agencies and organizations across the country.

Since its inception, Darden Harvest has donated more than 62 million pounds of food - the equivalent of serving three meals a day to 19,300 families of four for an entire year.

"We know that one out of every three pounds of food goes to the landfill," Brandon Tidwell, sustainability manager for Darden Restaurants, told Earth911. "So, this is a way to reduce waste-to-landfill and all the environmental impacts that come with that."

"At the same time, I think the real opportunity that we see is there's a gap between those who are fed and those who are not fed. It's really a way to get food resources to the people who are in the most need and be able to help provide for them."

To make sure nothing goes to waste, Darden employees take inventory in the kitchen after every shift. Food that is eligible for donation is prepared just as you'd get it on your plate at Red Lobster or Olive Garden, but instead of being served, it's flash-frozen and set aside in mint-green bins for pickup.Through the program, food that passes the restaurant-issued freshness date but is still entirely wholesome and edible by FDA standards is packaged, labeled and sent off to community organizations that feed the hungry, such as after-school programs, day cares, transition homes and rehabilitation centers.

"Our employees love the program, and they make it work," Tidwell said. "They are able to see the value of that food going to people who are in need."

The program has garnered so much attention that even Chelsea Clinton took notice. Last year, the former first daughter sat down with Darden COO Drew Madsen in aspecial report for "Rock Center with Brian Williams" to discuss how the restaurant giant is making a difference in people's lives. For Dee Mitten, executive director ofWaste Not - a food rescue program in Phoenix, the impact is immeasurable.

"It's just remarkable," Mitten said of Waste Not's partnership with Darden. "They make it so easy for us... and the hungry people of our community benefit tremendously."

Last year, Waste Not collected a staggering 146,938 pounds of food from local Darden restaurants and distributed it to more than 100 organizations throughout the Phoenix area. Through partnerships with regional distributors like Waste Not, along with national organizations like Food Donation Connection, Second Harvest and Feeding America, Darden now donates 10 to 12 million pounds of food per year from its 2,000 restaurants.

The program brings Darden closer to its ambitious goal of zero-waste. But on a larger scale, the restaurant giant hopes it will inspire other eateries to reclaim their surplus food and put it to good use.

"It's really a challenge for other restaurant companies to understand simply how easy the process is and why it's important to do it," Tidwell said. "Because it helps to feed people that are in need, and it helps to reduce waste to our landfills. So, it's something that we see a lot of benefits in, and we want others to join us in doing it."

To learn more about the Darden Harvest program and how it impacts hungry people in your community, check out the infographic below or visit Darden's website. 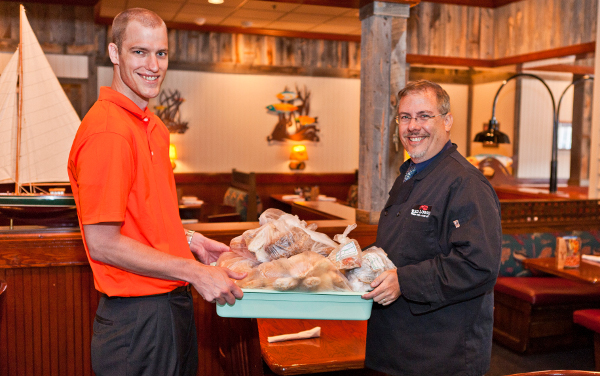 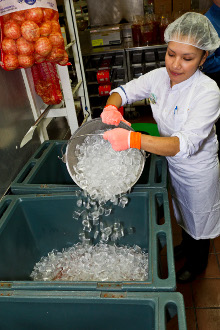