The site of a large predatory bird, soaring in the air near downtown Flint created a lot of excitement recently for a group walking along Thread Creek near GM’s Flint-North American Tooling Center.

The group – mainly Flint-area media – was hiking to a meadow where Consumers Energy employees were going to install a 45-foot pole and osprey nesting platform that had been fabricated in the nearby GM plant.

Delaying the start of the installation made sense so the media and other guests could do a little bird watching, with some wondering out loud if the bird in question was the osprey, whose appearance in recent weeks prompted the GM-Consumers Energy osprey nesting project.

Zooming in for a closer view, the photographers informed everyone it wasn’t an osprey but a bald eagle, which in itself was a site to behold in an area that has battled blight and environmental issues in recent years.

The eagle wasn’t the only performer that sunny, late-summer morning. An egret flew above Thread Creek, which winds its way along the eastern border of the GM plant, while two more egrets and a great blue heron perched on weathered logs, looking for food in the water.

With the bird watching completed, the group finished their trek to a meadow, where the Consumers Energy crew stood ready to lift and install the 45-foot wood pole. Consumers Energy has installed a number of osprey platforms in the state.

For employees at the GM tooling center, the fabrication and installation of the osprey nesting platform was a “labor of love”, said William Dau, personnel manager at the Flint plant. Dau and Dale Snyder, who is with UAW Local 659, enlisted the services of Consumers Energy and Osprey Watch of Southeast Michigan to locate and, ultimately, install the pole and platform.

Barb Jensen, with Osprey Watch, said the Flint osprey likely made its summer home in northern Michigan and was migrating south when spotted on several occasions near the GM plant. Osprey, also known as the fish hawk, prefer platform like perches, such as cell towers, Jensen said, adding the Flint platform could become home to an osprey when the birds migrate north next spring.

To learn more about ospreys and to follow six Michigan osprey that have GPS trackers visit www.michiganosprey.org. 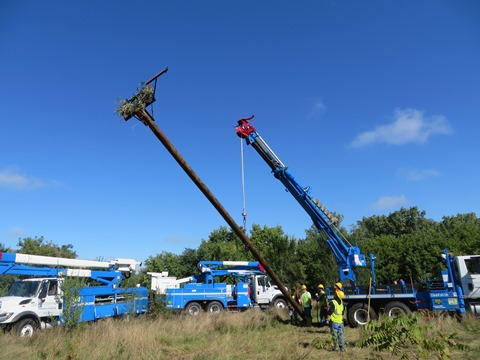