TransCanada Recognized for Leadership in R&D

Driving scientific breakthrough takes unwavering perseverance. It’s also something for which TransCanada has been recognized in 2014 after landing a spot on Canada’s Top 100 Corporate R&D Spenders list by Research Infosource Inc., Canada’s Source of R&D Intelligence.

“For us, this is about much more than just the dollars we’re spending annually,” says Thomas Robinson, TransCanada’s manager of Technology Management. “We work hard to identify the most cutting-edge R&D initiatives that will move the needle for our industry and benefit the people who use the energy we transport.”

TransCanada spent almost $24 million in R&D initiatives in 2013, and each project exemplified the company’s commitment to improving industry-wide standards and ensuring its growing portfolio of energy infrastructure assets meets the needs of people who rely on TransCanada to deliver their energy safely and reliably every day.

One such initiative is called Inverse Wave Field Extrapolation (IWEX), an emerging ultrasonic imaging technique that shows great potential in comprehensive 3D visualization of pipeline weld flaws. TransCanada’s involvement in this advanced method for detecting even the most minor defects could push the company – and the industry – into the next level of weld and material integrity investigations in the foreseeable future.

To complement TransCanada’s extensive R&D program, the company also conducts research in partnership with suppliers – like Applus RTD, with whom TransCanada is working in support of IWEX technology development, industry associations and peers, academia, government and non-government organizations in Canada, the United States and Mexico. This enables the leveraging of greater funding and shared results to improve industry-wide standards internationally.

This year, TransCanada worked with the Natural Sciences and Engineering Research Council of Canada (NSERC) to name an Industrial Research Chair in Welding for Energy Infrastructure at the University of Waterloo.

“Something the public might not be aware of is that this is the most focused research effort on pipeline welding nearly anywhere in the world,” says University of Waterloo Industrial Research Chair, Professor Adrian Gerlich. “I’m familiar with almost all the other major welding institutes around the world and virtually none of the other universities can claim to have even more than a couple students dedicated to welding of pipeline materials. But we’re going to have five or six at one time, which is a significantly bigger effort than most other places.”

Improving safety across the industry

“There’s no question that pipelines are the safest method of transporting the natural gas and crude oil that must be moved throughout North America every day to meet society’s needs,” says Robinson. “So continually improving the integrity and reliability of our pipelines and assets is, and always has been, one of TransCanada’s highest priorities.”

The partnership maximizes those combined research dollars to evaluate cutting-edge technologies to enhance external leak detection at the C-FER research facility in Edmonton, Alberta. This comprehensive research uses a state-of-the-art pipeline simulator known as the External Leak Detection Experimental Research (ELDER) test apparatus to evaluate the effectiveness of various external leak detection technologies in a setting that closely represents the conditions where liquids pipelines are installed.

In 2014, numerous independent agencies measuring different areas of corporate performance have recognized TransCanada’s leadership at national and global levels. The company was recently recognized as a world leader for corporate action on climate change as a member of the CDP’s (formerly the Carbon Disclosure Project) A List and also earned a spot on the Dow Jones Sustainability Index (DJSI) World and North America indices. As well, TransCanada was a 2014 Governance, Risk Management and Compliance (GRC) 20/20 Value Award recipient and acknowledged for its excellence in adapting financial audit software to improving internal project processes.

But the pursuit of excellence isn’t new to TransCanada. This year, TransCanada and Rolls-Royce also celebrated a 50-year partnership in industry-leading R&D, including TransCanada’s role as the first adopter of a Rolls-Royce jet-engine turbine in an industrial setting back in 1964.

“Our track record of implementing innovative solutions to meet customer needs spans over 60 years,” says Robinson. “And we’ll continue to conduct significant R&D in support of our responsibility to safety, community and the environment.”

Click here to read more about TransCanada’s R&D initiatives targeted at ensuring the safety of our communities and environmental stewardship. 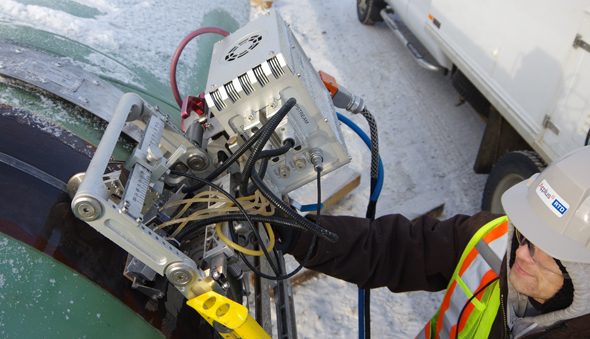