GRAND RAPIDS, Mich., January 5, 2017 /3BL Media/ – Consumers Energy has received a National Electric Utility Award from the National Association of Town Watch for its participation in the 2016 National Night Out (NNO) crime and drug prevention program.

Consumers Energy was the only electric provider in the country that received recognition for its participation in the 33rd annual event. This is the 23rd straight year the company has been recognized.

“Companies such as Consumers Energy enable us to reach more and more communities with National Night Out each year,” said Matt A. Peskin, national project coordinator for the National Association of Town Watch. “We are pleased to once again honor Consumers Energy with a national award, and we are proud to have it involved in this powerful, community-building campaign.”

“The purpose of National Night Out is to heighten awareness of crime and drug prevention. Teaming up with local radio and television stations helps us promote that message,” said Guy Packard, Consumers Energy’s vice president of electric operations. “We appreciate the opportunity to work with local law enforcement agencies and other community organizations on this important issue and thank them for their award-winning efforts.”

In addition to the Grand Rapids area events, Consumers Energy participated in NNO activities in Muskegon, Saginaw Township and Roscommon.

The 2016 NNO event was the largest ever, involving approximately 38.5 million people in more than 16,100 communities from all 50 states, U.S. territories and military bases worldwide. Local residents were encouraged to participate by turning on their porch lights from 7 to 10 p.m.

NNO is sponsored by the National Association of Town Watch and is co-sponsored locally by Consumers Energy.

National Night Out, a year-long community building campaign, is designed to: 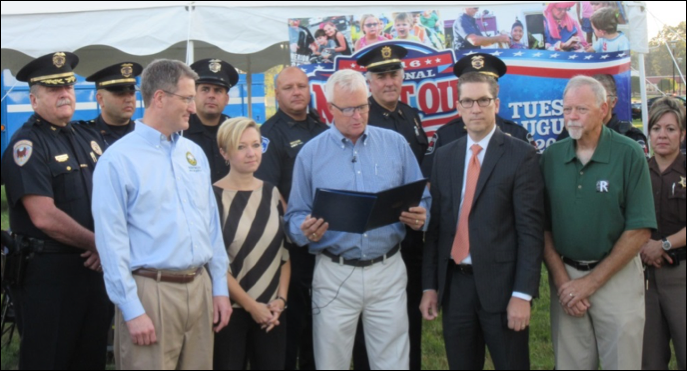