Disney will share expertise of its ‘Heroes Work Here’ initiative with small- and mid-sized companies to help them build their own veteran-hiring program
Sep 10, 2013 3:00 PM ET
Tweet This:
Just Announced: Disney is hosting the first-ever #DisneyVeteransInstitute to encourage hiring of U.S. Veterans: http://bit.ly/16hFJcS
Summary:

The day-long Veterans Institute, co-sponsored by Heroes Work Here and Disney Institute, is designed to help small- and mid-sized companies build effective veteran-hiring programs of their own. The event will feature experts from Disney’s Heroes Work Here, government officials, veterans, and non-profit veterans service organizations, who will share their experiences, best practices, and tips for making a successful transition from the military to the civilian workforce.

“We’re incredibly proud of the veterans who work at Disney, and we fully recognize the value, experience and skills they bring to our company,” said Robert A. Iger, Chairman and CEO, The Walt Disney Company. “Our Heroes Work Here program not only helps us find and hire highly qualified veterans, it also supports veterans and their families as they transition out of the military. We’re happy to share what we’ve learned with other organizations so that more of these modern-day heroes have the tools and opportunities to build meaningful careers in the private sector.”

Veterans Institute is the latest effort in Disney’s long history of respect and appreciation for the U.S. Armed Services, and it will leverage the success of Heroes Work Here, which Disney launched in March, 2012 with a commitment to hire more than 1,000 veterans by 2015—a goal the company has already surpassed. This past March, Disney increased its hiring goal to create opportunities for another 1,000 former service members in the next two years.

Highlights of the Veterans Institute workshop will include: an inside look at Heroes Work Here; renowned keynote speakers, panelists, Disney on-air talent and personalities; customized Disney Institute courses; advice and insights from experts and elite veterans support organizations; and stories from veterans about their own transition to the civilian workforce.

Featured speakers and presenters who are currently scheduled to appear include:

Supporting the U.S. Armed Forces has long been a Disney tradition, and Disney’s Heroes Work Here continues that proud legacy with a company-wide initiative to hire, train and support military veterans. Disney introduced the program in March, 2012 with a commitment to hire at least 1,000 veterans by 2015. Having exceeded that goal in the first year alone, with 1,300 veterans hired, the company announced in March, 2013 that it would create opportunities for another 1,000 former service members over the next two years.

Disney Institute is the professional development arm of The Walt Disney Company [NYSE: DIS]. Since its founding in 1986, Disney Institute has shared the company’s time-tested best practices in leadership, management, creativity/innovation, brand loyalty and customer service with millions of professionals around the world. Disney Institute remains the only professional development company to let participants step into a “living laboratory,” taking them behind-the-scenes at Disney’s theme parks and resorts to see first-hand how business theory drives operational excellence. To learn more, visit www.disneyinstitute.com or call 321-939-4600.

To participate in the conversation regarding the Disney ‘Veterans Institute’, please use the hashtag #DisneyVeteransInstitute. 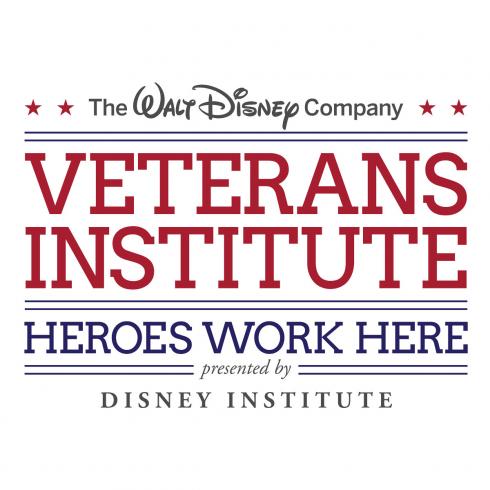 More from The Walt Disney Company