The first prize of the award, with a pot of 40,000 USD, will go to the organization Sustainable Organic Integrated Livelihoods (SOIL) in Haiti. Through community-driven ecological sanitation, where human waste is converted into valuable fertilizer, SOIL offers an integrated approach to the issues of inadequate sanitation, declining soil fertility and extensive erosion. Since building Haiti’s first EcoSan toilet in 2006, SOIL has gone on to become one of the country’s largest sanitation providers.

“Sanitation is seldom considered with regards to sustainable land management,” said Dr. Sasha Kramer, Executive Director of SOIL, reflecting on the meaning of winning the award. “But with over 250,000,000 cubic meters of nutrient rich human wastes being discharged into the environment every year, it is time that scientists and policy makers consider the management of human wastes as a driver for global sustainable land management.”

A prize of 30,000 USD will go to the Turkish Foundation for Combating Soil Erosion (TEMA). The largest environmental NGO in Turkey, TEMA has mobilized people across civil society, from children to farmers, gathering one million signatures in support of a law on soil protection, as well as providing practical leadership and training for holistic land management.

“Struggling for land preservation requires us to be patient and insistent like a rock, like the soil itself,” said Serar Sarigül, the general manager of TEMA. “It's very important and motivating for us to receive such an award, and it's very meaningful to receive it on our 20th anniversary. I would like to thank all my colleagues, our representatives and the 450,000 volunteers across Turkey, for making this happen.”

The award also goes to the organization Conservation Efforts for Community Development (CECOD) in Uganda, who will receive 30,000 USD. Concerned with increasing practical knowledge of sustainable development, CECOD has turned children into agents of change in rural communities through creating a network of eco-schools, training 7,500 teachers and involving 34,700 children in micro projects, such as organic farming and water harvesting.

“The land resources we use today are only borrowed from the next generation, meanwhile the current effects of desertification and climate change are a result of mistakes made by the recent past generation,” said Robert Isingoma, CECOD Country Director. “We must put the current generation at the center of environmental planning and let them take charge of shaping a sustainable future.”

Two organizations received special mention for their achievements from the Jury: DeCo! a social enterprise in Ghana selling high-grade fertilizer to farmers made from compost, and the Wand Foundation, an organization which helps farmers in the Philippines reclaim their land from usurious lenders and increase its productivity, also through fertilizer from ecological sanitation.

“These three winners exemplify the type of leadership and initiatives which are making the difference at grassroots level, improving livelihoods and ensuring land stewardship,” said Luc Gnacadja, Executive Secretary of the UNCCD. “We need to learn from them and help them to scale-up their work and disseminate the lessons learnt.”

More than one hundred applications for the prize were received from 52 countries. The competition was open to individuals, NGOs, governments, business, media and others that could demonstrate contributions to sustainable land management.

The winners were selected by a Jury of ten experts from the field of sustainable land management. Its members include well-known leaders such as, Ms. Yolanda Kakabadse, President of WWF International, Dr. Camilla Toulmin, Director, International Institute for Sustainable Development and Dennis Garrity, UNCCD Drylands Ambassador and former Director General of World Agro-Forestry Center, as well as other respected experts from government, the UNCCD, civil society and academia.

"How land is managed has a huge impact on natural ecosystems and resources.” said Yolanda Kakabadse, President of WWF International, speaking on behalf of the jury. “Degraded or abandoned lands need rehabilitating while pressure on land and water resources –which is becoming less and less predictable-- needs to be reduced. I applaud the Land for Life Award in recognizing leadership and innovation in sustainable land management today."

About the Land for Life Award
The Land for Life Award was launched at the 10th Conference of Parties to the UNCCD in Changwon, Republic of Korea as part of the Changwon Initiative in October 2011.  This year’s award program is supported by the Korea Forest Service, German Federal Ministry for Economic Cooperation and Development (BMZ), the Global Environment Facility, International Union for Conservation of Nature, the Qatar National Food Security Programme, the Business Forum in Korea and the Elion Resources Group, China.

About the UNCCD
Desertification, along with climate change and the loss of biodiversity, were identified as the greatest challenges to sustainable development during the 1992 Rio Earth Summit. Established in 1994, UNCCD is the sole legally binding international agreement linking environment, development and the promotion of healthy soils. The Convention’s 195 signatory Parties work to alleviate poverty in the drylands, maintain and restore the land’s productivity, and mitigate the effects of drought. 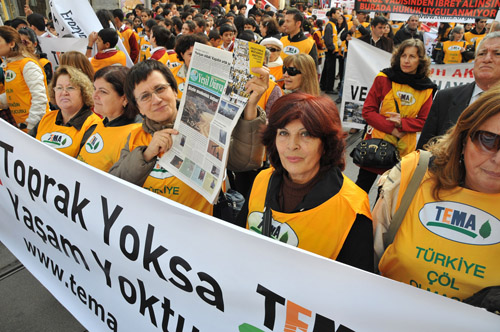